Serbia qualified for the 2013 FIVB Volleyball Women’s U20 World Championship – even with one round still to go at “Dudova Suma” sports hall in Subotica – by edging Belgium 3:1 (25-16, 24-26, 25-20, and 25-12) to make sure they will finish first in the final standing of this qualifier. Read latest volleyball news on Worldofvolley.com. 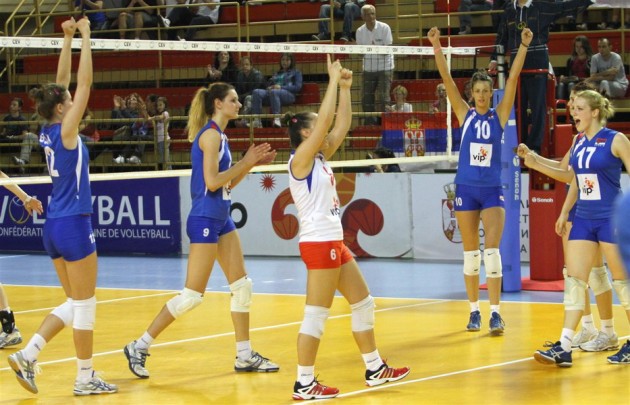 Opposite Tijana Boskovic top scored for the home side with 22 points with Serbia’s stats showing 16 block kills and 11 aces in the end.

The home side imposed their pace right from the start of the much anticipated game with Belgium. Serbia easily claimed the opening set (25-16) but they found much more resistance in the second where the score was kept tight by the Belgians. The guests moved up 18:13 after the second break and though Serbia drew level twice – at 19 and 21 – Belgium could cash their second set ball to seal the final 24-26 and go for the provisional 1:1 in sets.

By alternating excellent actions and silly mistakes, the teams fought point for point in set 3 up to 19 all; two blocks by their team captain Bianka Busa helped Serbia move to the front (23:19) and the set came to a close only a few seconds later at 25-20 for the home heroines. The start of the fourth set re-produced the story that the audience had already seen in the previous one: after the score stood at 8 all, Natasa Cikiriz replaced young opposite Tijana Boskovic and Serbia made an 8:0 run that practically determined the fate of the game. Helped by the blocks killed by Mina Popovic and good serving contributed by Nikolina Lukic, Serbia moved up 23:10 and Jelena Trnic sealed the final 25-12 for a 3:1 win.

“We played very aggressive as we knew that it would be a very difficult game. We fought for every ball but that wasn’t enough” Sarah Coppens, captain of Belgium, said after the game.

“We know Serbia very well because we played so many matches and we prepared with them, we were focused and we played good Volleyball but I think that we couldn’t stop their march. I’m proud of my players because they were fighting all the time and showed good defense. We lost but this was the best game played by this team” head coach Julien Van de Vyver added.

“This match was very important for us because it decided about who will qualify for the World Championship. I’m happy because we got that ticket and tomorrow we will do our best to take one more victory. Congratulations to my teammates” said the youngest member of the Serbian team, Tijana Boskovic.

Serbian head coach Ratko Pavlicevic concluded: “In the beginning of this match we felt some pressure because we knew that it was extremely important. We needed to win and because of that in some moments we made unnecessary mistakes. Belgium showed that they have a very good team but we were better. I’m proud of my girls, they played the best when it was needed and with this pre-condition you just can’t miss a good result”.