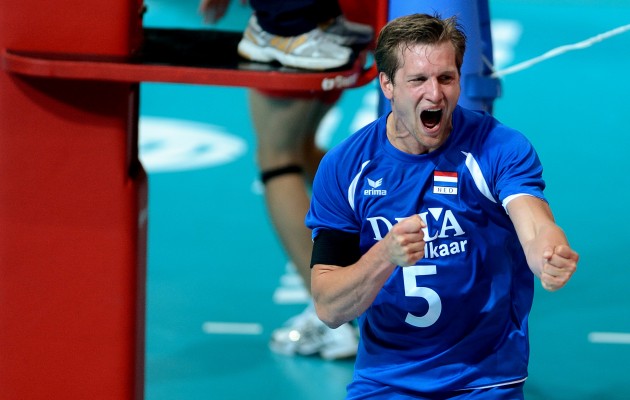 The Netherlands stayed on the good side of the score up to 5-4, when Japanese top scorer Tatsuya Fukuzawa managed get a side of the Dutch. An out served ball of Japanese team captain Kota Yamamura followed by a net fault of Daisuke Yako created a gap for the Dutch (12-9).

Japan however managed to get back in the game and when Fukuzawa blocked a spike of Wytze Kooistra, the margin had diminished to one point (14-13). The longest rally in the opening set was won by the visiting team (18-17), but the squad of coach Gary Sato was not able to take back the lead again. Maan’s 5th block point brought the set point for the Dutch (24-20), which was cashed immediately.

Both teams were quite equivalent in the first phase of the second act, resulting in a minor lead for the Netherlands at the first obligatory pause (8-7). The orange crowd in Apeldoorn started getting louder when Maan scored a straight ace (12-9) and when captain Rob Bontje scored from the mid position with an unstoppable spike, Omnisport practically exploded (15-12).

Coach Sato tried to stop the Dutch train by a double substitution, but the home team unshakably marched towards the end of the set. The always inspired Maan ended the second act with an unstoppable spike (25-21).

Japan knew an unlucky start of the third set. After two service faults, the Netherlands led with 5-3. The team of coach Edwin Benne pumped up the pressure (7-3), whereas Japan struggled to keep pace. The reception on Japanese side did not function as well as yesterday and when Kooistra chastised that with an unstoppable spike, Sato had to use his second time out already (12-7).

The Japanese kept on failing in their service, thus helping the Dutch to widen the gap (17-11). At 17-12, Niels Klapwijk made his return in the Dutch playing field at 17-12 and seemed to fit in immediately. The Japanese did not manage to pass the Dutch block by the end of the set and match (23-16). Finally Dutch top scorer Maan (17 points) closed the second match in Apeldoorn at 25-18.

Jelte Maan was the best scorer on the match with 17 points falowed by Wytze Kooistra whit 12 points. In the Japanese team top scorer was Yu Koshikawa with 11 points.