The Budo Center will be playing host this coming weekend to the first round of play in Pool A of the 2013 CEV Volleyball European League – Men. The sports hall in Austria’s capital city will see the hosts play Belgium, Slovakia and Denmark in the first tournament of a competition where an innovative scoring system will be tested for the first time. 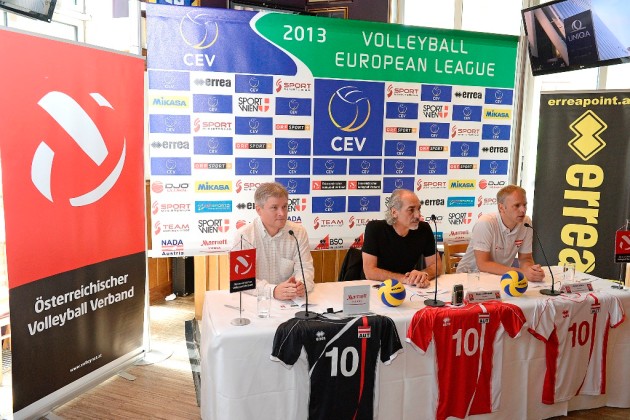 Though he still feels disappointed from the World Championship qualifier where Austria finished only third, head coach Michael Warm feels confident for the start of the European League. “The World Championship qualifier simply came too early for us. We are extremely motivated to perform well in the European League and the players are in good shape”.

Lorenz Koraimann joined the group this past Thursday after nursing a borreliosis. Daniel Gavan announced his retirement from the national team right upon completion of the World Champs qualifier in Belgium this past May and hence Oliver Binder has taken up the role of team captain. “All players know they have to play their best to make the starting six and the return of Philip Schneider makes it even more interesting for the outside hitters. We have very good quality in every position and we have been working hard for the past few weeks” Warm stresses.

About the teams included on Pool A, Warm says: “It is a very good but also tough group. Slovakia wants to win the European League to make it to the World League next year while Denmark is just about to host the European Championship. On the other hand, Belgium is certainly a valuable asset for this edition of the European League”. Austria lost 1:3 to the Belgians this past May at the World Champs qualifier in Kortrijk but Warm recalls that “we played strong in some phases”.

The President of the Austrian Volleyball Federation Peter Kleinmann is aware that the opponents are strong: “We have a tough task ahead. However, last year we performed well and scored 5 wins in the competition. Our goal for this season is to improve on the positive figures from last year” he says.

The revenues from the ticket sale will be donated to a charity “MyAid” that the Austrian Volleyball Federation is actively supporting since last year and that collects funds to help children fighting against cancer.