In another exhausting match played at Juan Pinasco Villanueva Coliseum of the warm Iquitos, Cuba won 3-2 over hosts Peru in more than two hours on Wednesday. Ana Cleger, Rosanna Giel, Raffaela Camet and Patricia Soto were the top scorers. 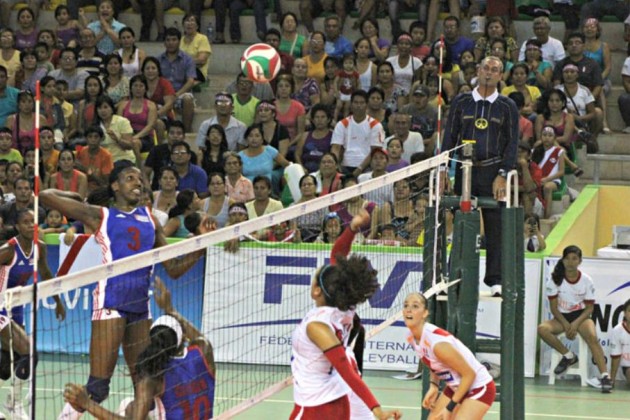 Playing under a noisy partisan crown, the Cubans were able to keep their effectiveness in their attack scoring 61 points against 47 by the Peruvians, besides relying on their blocking to score 13 points to 10 by the local squad.

Cuban captain Ana Cleger was again the top scorer of her team with 19 points, followed by the 17 of Rosanna Giel.

Nevertheless, the best scorers of the match were on the Peruvian side with Raffaela Camet recording 23 and Patricia Soto finishing with 20.

Cleger commented at the end of the match how glad she was with her performance “even though I think I can offer more, especially in a match of such importance to seal the qualification to next Grand Prix.”

The Cuban coach Juan Carlos Gala praised his pupils “because despite being so young, they were able to overcome their inexperience, gave everything on the court and kept the calm against an opponent of level and against the crowd.”

Mirtha Uribe, Peru’s captain, commented: “We went out to court with the desire of winning. I think we were close, but lacked the calm at the end. We thank the fans from Iquitos for their support and presence at the coliseum and we hope to give them more in the future.”

Sun Hong, coach of the host team said his side “showed much of what I want to have in order to think about future wins. Now we have to intensify our work to achieve positive results.”