The Netherlands and Portugal faced off in an exciting five-set match on Saturday, where the visiting team won 3-2. Alexandre Ferreira and Marcel Keller Gil had a good game. WorldofVolley brings you the latest volleyball news. 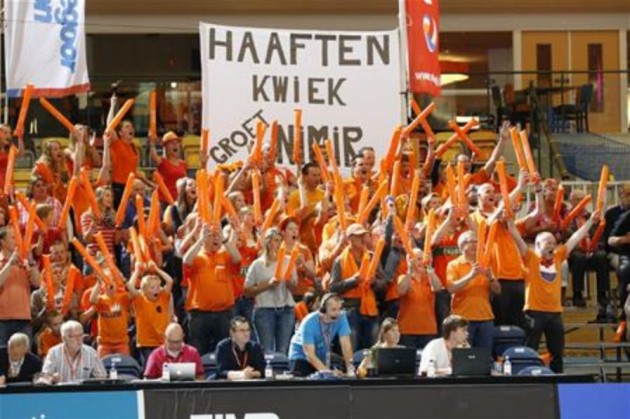 The five-set match was somewhat familiar for the two teams, as both World League promotion matches between the teams last year in Rotterdam took five sets.

On Saturday, the opening set in Apeldoorn again showed equivalency of the two teams. Though the Dutch led with 6-4 after a service error of Portugal, the Portuguese were on the good side of the score at the first obligatory set break (7-8). The home team tried to put up the service pressure, but that resulted in more service errors. At  9-11, Dutch coach Edwin Benne called his team on the side. Portugal however slowly but surely built out its lead (15-18, 16-19). After another impressive smash of Alexandre Ferreira (“Alex”), the margin had grown to five points (16-21). The Dutch did not manage to get in pace anymore, whereas the Portuguese were on track.  Alex finished the job in style with a straight service ace, his tenth point in the opening set (21-25).

The home team got a better start in the second act, immediately creating a gap (4-1). When Dutchman Jeroen Rauwerdink, who played his 200th cap on Saturday, spiked through a 3 men block, the score board showed 12-8. Portugal managed to get in pace again, causing Dutch coach Benne to call for a time out at 12-11. That sorted the wanted effect, the Netherlands had enlarged the margin to three points at the second technical time out. When setter Nimir Abdelaziz scored two service aces in a row, Portuguese coach Flavio Gulinelli called his team on the side (19-14). When Rauwerdink flew in from the 3 meter line, the Dutch cashed their 20th point (20-16). The jubilee also had the honour to close the second set with a service ace: 25-19.

In the opening phase of third set the teams were quite equivalent again, but after an unstoppable spike of Alex, the Portuguese had created a small gap (8-10). The Netherlands managed to level the score again at 12-12. The longest rally of the match was won by the home team (14-14), a few minutes later a service ace of substitute Nico Freriks brought the Orange team on the good side of score again (19-18). After a successful Portuguese block, the score evened again (22-22), but then two unforced errors of Portugal brought the Dutch their first set point. An out spiked ball ended the third act in favour of the home team: 25-23.

Though the Dutch immediately created a gap in the fourth set (4-1), Portugal managed to get even at 6-6 and took over the lead impressively. At 8-12, Benne substituted setter Nimir Abdelaziz by the more experienced Nico Freriks. The Netherlands approached (13-15), and after three successful Dutch blocks in one rally, the difference had diminished to one point in favour of the visiting team (15-16). Portugal managed to walk away again (18-21), but the Netherlands refused to give in (21-22). The squad of Gulinelli finally managed to cash its sixth set point (26-28).

In the decisive set, the teams scored alternately up to 6-6. With the skill of  team captain Rauwerdink, the home team managed to create a gap of three points (9-6). Portugal kept cool and levelled the score again at 10-10, taking over the lead after a kill block of Alex and Marcel Keller Gil. The Netherlands levelled again at 13-13, after which Portugal created its first match point which was cashed immediately.