Cuban receiver Noris Cabrera, who played last season for Atom Trefl Sopot, decided to change the club and the country. She will defend colors of the team from Belarus. 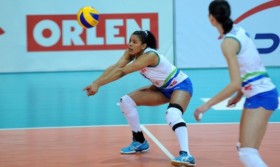 According to reports in the Russian media, a 27-year-old athlete, who contributed to the success of Atom Trefl Sopot in the last season’s Orlen League finals, has already had two appearances in the jersey of Khara Morin Ulan Ude.

It seemes it is only a matter of time when Noris Cabrera will sign the contract with the Belarusian club.

New team of the Cuban player will have its debut in Russian Super League this season. Cabrera won’t be the only player from this Carribean country in the Russian league next season.

See the profile of Noris Cabrera.