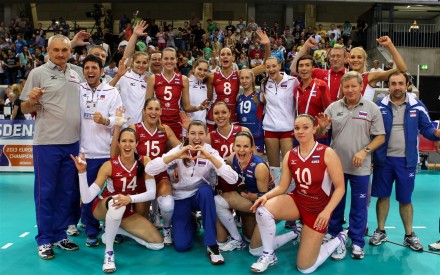 The first set ran quite equally and Russia led at the first technical timeout with 8:6 after a one-block of Anastasia Shlyakhovaya. The neck-and-neck race continued and the Russian opposite Nataliya Obmochaeva and the Croatian opposite Sanja Popovic gained the most points for their teams until the technical timeout at 16-15 for Russia. With two block successes Russia hard-earned the set ball at 24-21 and wins after a mistake of Croatia with 25-21. Altogether the Croatian players passed the balls in a better way, but the Russians were dominant in attacking.

In the second set the equal duel continued and the Croatian middle-blocker Sanja Popovic proved notably high bounce which enthused the audience. The Croatians moved towards a tight leading with 8-7 after a block. The Russian opposite Nataliya Obmochaeva couldn’t be stopped by the Croatian block because of her height of 6”4 and achieved one point after the other. The Russians led at 12-11 for the first time and were ahead with 16-12 at the second technical timeout. Russia was ahead with 24-22 after exciting match minutes, but two successful attacks of the Croatian wing-spiker Mia Jerkov after spectacular rallies brought Croatia on the same level at 24-24. The Russian coach Yuriy Marichev took a timeout and with an attack of the Russian wing-spiker over the Croatian block with a one-block of the Russian middle-blocker Anastasia Shlyakhovaya Russia won 26-24.

Overall the Croatian team was statistically dominant in passing and attacking, but practically this wasn’t enough for a set win.In the third set the Croatians led 10-6 after a battlesome and emotional loaded performance. At the second technical timeout the Croatians were five points ahead which was supported strongly by the hard attacks of the opposite Sanja Popovic. The Russian team didn’t surrender and thus it was only 22-21 for Croatia at the timeout through the Croatian coach. An excellent passing feint of the Croatian setter Ana Grbac led the Croatians to the set win at 25-23.

Russia started up the fourth set so strongly that the Croatian coach Igor Lovrinov reacted already with a timeout at 1-4 for Russia. The Croatians showed a very strong pugnacity and led 16-14 at the second technical timeout. Russia achieved, especially with the support of the wing-spiker Tatiana Kosheleva, the leadership at 23-22 after a three-block in the final phase of the match and didn’t let it out of its hands until the set win at 25-22.

ECH W: “We got back into tournament with this win” – said Brakocevic