After Russia swept Slovakia on their play off match, both coaches and team captains attended the press conference. 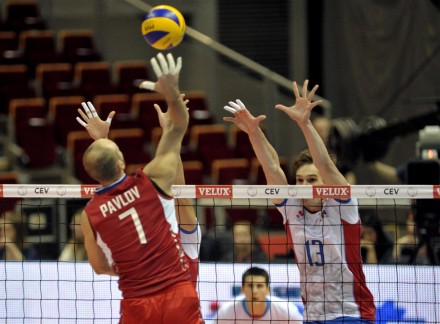 “Sadly this is the end of our adventure here at EuroVolley. Our opponent was very strong and with this performance they have confirmed their role as pre-favourite of the tournament” said Slovak team captain Michal Masny. “Today we served well but Russia was the better team. So my congratulations to them and I wish them also good luck for the remainder of this Championship”.
“This afternoon we got to see Russia’s quality, especially when it comes to their serve” added Stefan Chrtiansky. “My team played their best and even more but it was not enough. We simply did not stand any chance to win especially if Russia plays at that level like they did today. We could have had a chance if they hadn’t served that well, but eventually that was one of their strong points in this game. Today they showed their real strength and I am sure that they will make it to the final weekend and most probably win gold there. I want to thank my players especially since many were debuting at the European Championships. They have improved match after match and I am happy with this”.

“We are obviously happy with this straight win as we have saved some energy” said Russia team captain Sergey Makarov. “Today we served better, spiked better than our opponents. We wish Slovakia all the best for the future while we will start immediately preparing for our game with France coming up tomorrow”.
“I am happy with the performance of my team. We wanted to focus on this game and save as much energy as possible for tomorrow. The score is fine though we could have performed better in some elements. We must try to improve on these things. Slovakia played good in their Pool but today we were the better side” concluded Russian mentor Andrey Voronkov.