Four time consecutive World Champions, Diatec Trentino are out of the competition! European Champion, Lokomotiv Novosibirsk led by coach Voronkov won the semifinals against the Italians 3-1 (25-27, 25-21, 26-24, 25-23) and will fight for the World Championship! 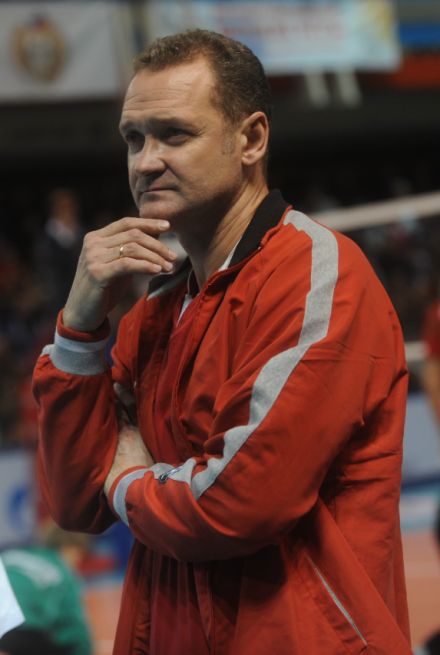 First semifinal match of the Club World Championship between Diatec Trentino and Lokomotiv Novosibirsk was the game to watch and game everyone was waiting for.

It started fierce with both sides maybe even a little bit nervous. Trentino hang until the very end when their most experienced player Donald Suxho got the red card for protesting and Novosibirsk could smell the 1-0 lead. But stubborn Italians managed to get back after 24-22 deficit and eventually win the first set by 27-25.

Controversy and rumble continued into the second period. Result was pretty much even with Lokomotiv leading by few points most of the time. This time Trentino’s clean ace was denied by the referee at again troublesome result at the end of the set (20-18) and Lokomotiv even things up (25-21).

Most of the time when result is 1-1 third set is the deciding one. Both teams entered this third period with all they’ve got. Lokomotiv lead by a fair margin of points until the very end when Trentino managed to equalize to 24-24. Attack by Divis got through and Lokomotiv got another set point which Butko materialized with astonishing ace (26-24).

Everything was on the Russians side but that wasn’t enough for them to start the fourth set well. Trentino was steamrolling and led by 11-5. But point by point, bit by bit, Lokomotiv cut Trentino’s lead to 2 (15-13) and later even turned result around 20-21! Blocking was amazing for the Russians, Camejo and Volvich couldn’t be stopped and were the main reason for Lokomotiv’s comeback in the fourt set. Never the less, ”heart of a champion” that Trentino has, woke up when it mattered the most and with amazing defence regained the lead 23-22. But then probably best player on this Trentino team, Tsvetan Sokolov, could have been the hero but instead his two mistakes kick four time defending CWCH Champions, Trentino, out of the competition and made way for another team to win this prestigious event!

GER W: Another defeat of Schweriner!

Fans go crazy about her – Kazakh...