No matter what happens in the matches to come, heroes of the second round will be Budvanska Rivijera! In front of packed RCWS Podpromie arena in Rzeszow, Montenegrian champions managed to get the second win in two matches and to sit on top of the Pool C. 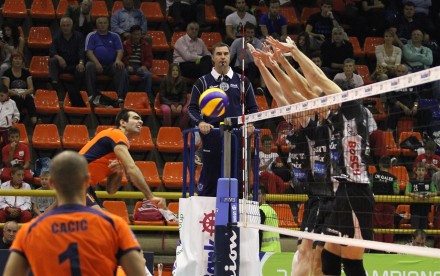 Four thousand people in Rzeszow saw the best of Montenegrian volleyball. Sinisa Reljic’s squad started the game with astonishing tempo. They’ve won the first two sets by leading the whole time. Such a composure is an atribute of much stronger teams, but on this day, Budvanska Rivijera had it.

Aleksandar Minic, new boost to Montenegrian squad, who came from Partizan this summer, had an amazing game with 26 points on a 52% of attack and three aces. he had much help in experienced middle blocker Milan Markovic who toyed with Resovia defence, had 15 points with 86% in attack! Pair of recievers also must be mentioned as Cacic and Bojic had 18 points each.

In home team only Schops was on his usual level, and everyone else failed to perform. Germany’s captain had 21 point but that wasn’t enough to protect the home ground.