Japanese Volleyball Association president, Dr. Yuichiro Hamu, said to be both proud and grateful about the opportunity to host for sixth consecutive time the FIVB Grand Champions Cup in Japan. The women’s event kicks off here on Tuesday with the match between the Dominican Republic and Thailand, followed by the contest of Brazil and United States. The third and last match of opening day features the clash between Russia and hosts Japan. 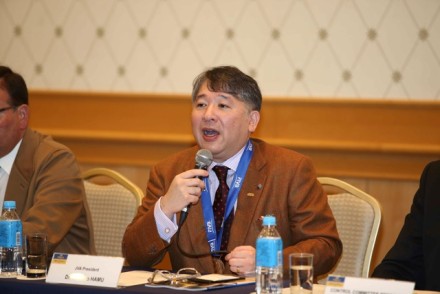 “I am very proud for this opportunity to present once again the Grand Champions Cup in Japan,” Dr. Hamu said in his welcoming words during the joint meeting of the Local Organizing Committee and the FIVB Control Committee. “I am also very grateful to FIVB and its President Dr. Ary Graça, for their confidence shown to us to organize the competition.”

Dr. Hamu, who was elected this year as president of JVA, said the Grand Champions Cup is the biggest volleyball competition since the London Olympics.

“I think each participating team will have new players as part of the new Olympic cycle and I hope all the players will give their best for the excitement of the volleyball fans in Japan and around the world,” he said.

Cristobal Marte Hoffiz, First Executive Vice President of FIVB and president of the Control Committee, presented Dr. Hamu with a bronze medal similar to the ones won by Japan during the recently concluded FIVB U23 Women’s World Championship in Mexico.

“The Japanese team won the bronze medal in this new age-group competition and I am sure that some of those players will be part of the national team of Japan in the 2020 Games in Tokyo,” Marte Hoffiz said. “We are delighted to be again in a well organised competition in Japan and we all are looking forward to have a great event here in Nagoya and then in Tokyo.”