As the year 2013 draws to a close, Hungary’s Volleyball family looks back at many changes and important achievements that have marked the last months. 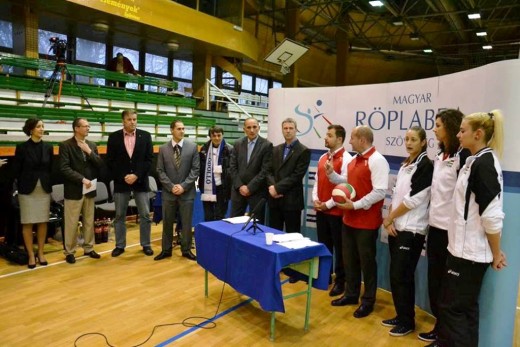 Everything got started in May as Csaba Poór got 39 out of the 55 votes cast by the delegates who attended the General Assembly of the Hungarian Volleyball Federation.

The 2013 summer was a busy one for the national teams that started their campaign to qualify to the 2014 FIVB World Championships in May and after that also participated in the 2013 edition of the CEV Volleyball European League.

While the men’s national team was eliminated in May from the race for the World Championship after finishing fourth at the first-round qualifier in Ljubljana, the women topped the charts at the second round tournament held in early October in Ra’anana, Israel, and will be back in action through January 3-5 as they play France, the Netherlands and hosts Croatia in Rovinj.

The Hungarian Volleyball Federation signed in December a cooperation agreement involving 47 clubs from eight different cities with the intention to re-structure and foster the development of the sport across the country. The Federation also signed a sponsorship deal with Asics as well as with Destra Ltd. that currently provides five cars to the governing body for Volleyball in Hungary.

On December 6 the delegates attending the General Assembly could be happy to see some of the financial issues that affected Hungary’s Volleyball family in recent times being finally resolved and that same day the Federation presented its end-of-the-year awards to the best players and coaches in 2013. A special award was presented to the members of the national team that had won silver at the 1963 Men’s European Championship in Romania.

Another award was handed over to the players that composed Hungary women’s national team that claimed bronze at the 1983 European Championship in East Germany.

Additionally, it was recently announced that the financial support provided by the government to the Hungarian Volleyball Federation has doubled up to 4,259,000,000 HUF. This amount of money will be provided by the government on an annual basis up to 2020, which means that the support provided to all Volleyball clubs will significantly increase as well. “These additional resources are a reason to celebrate but also a responsibility towards the national government and the clubs as well” says President Poór.

“We need to show that we deserve this confidence and to spend this money in a good way. Personally I count on everyone to work together also in 2014 as hard as we did in 2013.”

After a few tough years, the Hungarian Volleyball Federation is now fully committed to work hard for the good of the affiliated clubs. Their entry feeds will be reduced by 40%, something that never occurred before since the Hungarian Volleyball Federation was founded back in 1946. 50% of the annual budget provided by the government will be spent to support the clubs and their activities. “We want to improve their infrastructure and management as well” adds Mr. Poor.

“I have visited many sports halls in the past months and their state and condition was really deplorable in some cases. We want to change this and make sure that our players can train and play in good gyms. Our long-term goal is that by 2020 we will have tripled the number of licensed players. We would like to see more players, more coaches, better infrastructure, more fans and more Volleyball.”

The last good news were released shortly before Christmas: 96 children in need aged from 8 to 18 will have the opportunity to attend next year a Volleyball camp upon payment of a symbolic registration fee standing at 2,000 HUF (i.e. 6.70 €).