Shortly before the start of the CEV Volleyball Cup semifinal game with PARIS Volley, the club of Tomis CONSTANTA organized a special ceremony to celebrate former players, coaches and other personalities for their contribution to the development of volleyball in the city situated on the shores of the Black Sea. The ceremony was chaired by the Executive Director of Tomis, Mr. Serhan Cadar. 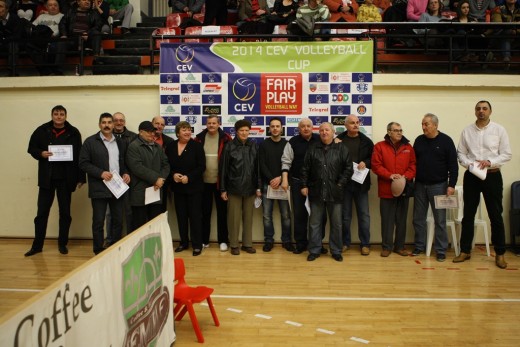 The list of people awarded includes Romeo Enescu, a former head coach of Tomis who participated in the 1972 Olympics in Munich with Romania’s national team, former mentor Gheorghe Brinza, and former players Valentin Iancu, Milen Uzunov, Bogdan Neamu, and Mihai Mihaila, who wore the jersey of the team from Constanta – back then known as Farul – some 30-40 years ago.

“We wanted to have a moment where we could reward all those people who have contributed to the development of our sport here in Constanta” Serhan Cadar explains. “As for the game with PARIS Volley, we are very proud of our team who showed a superb performance. We fought until the end to make the final and I think we honorably represented Romania as well as the city of Constanta”.