EuroVolley 2013 Sport Event of the Year in Copenhagen

Last September Parken football stadium in Copenhagen was a spectacular setting for the historic Final Four Weekend in the 2013 CEV VELUX Volleyball European Championship – Men. Last night the Championship was awarded Sport Event of the Year 2013 in Copenhagen. 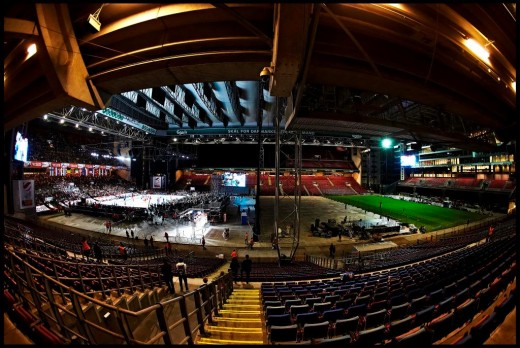 Fans from 37 countries had a party on the tribunes and in the VELUX Fan Zone, and the creme de la creme of European volleyball fought for gold in Parken, when the Final Four Weekend took place in the national football arena of Denmark, Parken, the 28th and 29th of September.

Monday evening VELUX EuroVolley 2013 was awarded Sport Event of the Year 2013 in Copenhagen.

The minister of Culture in Copenhagen, Carl Christian Ebbesen, presented the award. He stressed that the Final Four Weekend in Parken, Copenhagen had taken European volleyball to the next level.

“We are very pleased to receive the award for Sport Event of the Year 2013 in Copenhagen. The Final Four Weekend in Parken football stadium was something new and spectacular and not seen before in European volleyball,” says Erik Jacobsen, president of the Danish Volleyball Federation.

“I would like to give a warm thank to the many hundreds of volunteers, who did a tremendous effort during the championship. I also like to thank our fantastic partners, Wonderful Copenhagen and Sport Event Denmark, who made this possible,” he says.

Parken football stadium was extraordinary transformed into a volleyball arena for the Final Four Weekend at VELUX EuroVolley 2013. The semi-finals, bronze medal match, and final were played. The Eurovision Song Contest Winner Emmelie de Forest sang at the closing ceremony. Crown prince Frederik presented the championship trophy to Russia. And then it was all packed back down again – in just 72 hours in total.

VELUX EuroVolley 2013 has made a great impact in the sport year of 2013 in Denmark. Last month the championship was awarded Sport Event of the Year in Aarhus and last night the event received the same glory in the capital Copenhagen.

INTERVIEW: Ivan Castellani – “We have to trust Velasco”