Baku, Azerbaijan, April 16, 2012. Rabita BAKU was crowned this past Sunday Azerbaijan’s national champion for the fifth consecutive season. With this result the players mentored by Zoran Gajic capped a memorable season that had started in early October as Rabita finished atop of the standings at the FIVB Club World Champs in Doha, Qatar, and continued in late December with another first place at the “Top Volley International” tournament in Basel, Switzerland.

The Playoffs were played with a double round robin joined by the top five teams coming out of the regular season and in the end Rabita topped the charts with the podium completed by the winners and runner-ups of the 2012 CEV Volleyball Challenge Cup, i.e. Lokomotiv and Baki BAKU.

Starting from the stats of the Playoffs individual awards were distributed as follows: 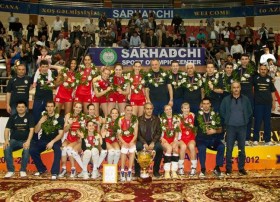 ITA A1: Trento in Final of Play Off

What a blunder by organizers! Chinese anthem...