Luxembourg, April 15, 2012. A total of 8 second-round qualifiers were played this week for the 2012 CEV Junior Volleyball European Championship distributing 4 passes per gender to advance directly to the final round of the competition which will be co-hosted by Poland and Denmark for the men (August 25-September 2) while the women’s Championship is set to celebrate its climax in Ankara, Turkey, this coming August 18-26, 2012. 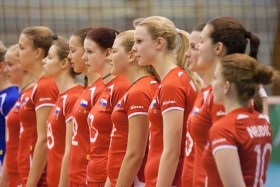 Greece, Belgium, Spain and Turkey joined this weekend the hosting countries, Poland and Denmark, as well as the 2010 medalists (Russia, Bulgaria and Serbia) for the final round of the men’s competition after topping the standings of their respective second-round Pools. The second and third-ranked teams of these groups (i.e. Finland and Italy from Pool A, the Netherlands and Ukraine from Pool B, France and Slovenia from Pool C as well as Germany and Austria coming out of Pool D) will have a last chance to make it to Gdynia and Randers, venues of the final round, as they join a couple of third round qualifiers that are set to take place this coming July 12-15 and whose venues will be determined in the next weeks. The winners of these third-round Pools as well as the second ranked team with the best score will join the starting field of the final round.

As for the girls, tickets for the final round were booked by the national teams of Poland, Slovenia, Russia and Slovakia that hence join the hosts of Turkey and the 2010 medalists (Italy, Serbia and the Czech Republic) for what is expected to be one of the major highlights of this coming summer. The second and third ranked teams stemming from the second-round Pools (Germany and France from Pool A, Croatia and Belgium from Pool B, Romania and Finland coming out of Pool C plus Bulgaria and Austria) will have their last call in July as well with four tickets still to be assigned there and going to the winners as well as to the runner-ups of the third round qualifiers whose venues will be also announced in some weeks.

ITA A1: Serie A1 Sustenium Semi-finals game 2 in numbers