The European champions are once again together. On April 16th both teams started the preparations for the challenges this year. Although both men's and women’s team are the champions of Europe, they still have not qualified for the Olympic Games and that will be their first obligation this year. 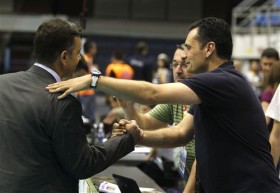 Welcome champions – said the president of the Volleyball Association of Serbia, Aleksandar Boricic. The last year was unique and the best in history. We won the European Championship, won many medals in all categories and organized many competitions and all that thanks to the volleyball family. This year we will not win many medals, because there are no many competitions. However, this is the Olympic year and our main goal is the qualification for London. I do not doubt that both teams will secure their places in the Olympic Games, as was the case 4 years ago in Beijing.

Both head coaches, Zoran Terzic and Igor Kolakovic agreed with Aleksandar Boricic that they will try to secure the placement in London in the first round.

–  In Ankara from 1th to 6th May we will participate in some kind of European championship, where we should win gold medal and qualify for the Olympic Games. The quality and the results we have achieved last year give us the right to believe in that. If we do not succeed there, we have another chance in Japan – said Terzic.

The boys led by Igor Kolakovic will try to secure the visa for London in Sofija from 8th to 13th May.

– The Olympic Games are the dream of every sportsman and the biggest competition on the planet. We are aware of the difficulties, but we have a big challenge in front of us, especially the young boys, who will try to get the great results for the first time without the experienced players. I think that we are physically and psychologically ready for that – said Kolakovic.

PHOTO OF THE DAY: Referee, maybe you...