Mexico moved to 2-0 in Pool A in the NORCECA Men’s Continental Olympic Qualification Tournament by defeating Trinidad & Tobago 25-18, 19-25, 25-21, 25-22 on Tuesday at the Walter Pyramid in Long Beach, Calif. Dominican Republic falls to 0-2 in the tournament. 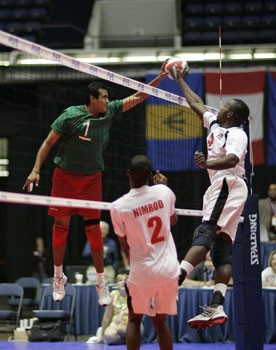 Gerardo Contreras and Carlos Guerra contributed 20 points each in leading Mexico to victory.

Mexico concludes Pool A on Wednesday against United States at 20:00, while Trinidad & Tobago faces Costa Rica at 15:00.

“Since we saw them last year, Trinidad & Tobago has improved a lot,” Mexico Coach Jorge Miguel Azair said. “We made a lot of mistakes in reception. It’s a win, and we’re looking ahead to tomorrow.”

“It’s been six years since we won one set from Mexico,” Trinidad & Tobago Coach Gideon Dickson said. “Our goal is to be competitive each day. Mexico had experience and poise during crucial parts of the game and that was the difference.”