Cuba captain Wilfredo Leon said:“The match went as we thought it was going to go, we think it was a great match to end the competition. But of course we didn’t classify, but at least we finished okay. Overall, we think we had a good tournament. It has served as a good experience for the next competition.” 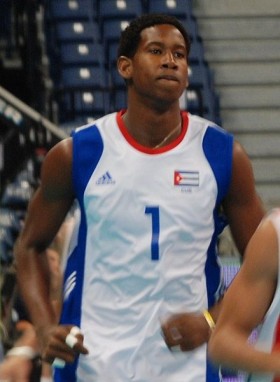 Cuba Coach Samuels Orlando “For us, I think it hasn’t been a good competition,” Cuba coach Orland Samuels said. “Our athletes are very young and they have to compete a lot more. As the tournament went on, we observed some positive improvements in the team.

Unfortunately for Puerto Rico, our best match is the one we played against them. Puerto Rico played five sets last night, so they have not recuperated from that yet.Tomorrow we leave for Cuba, then we leave for Japan for World League. We are going to play three more matches that will serve as preparation with this team, basically.”

“Cuba played a good match and won 3-0,” Puerto Rico captain Victor Rivera said. “They wanted it. I think we were frustrated from last night. We didn’t play 100 percent to win like we did last time. It was a tough match last night. It drained all our energy. Cuba played great. I think it was not just the fatigue from last night, it was the fatigue from the whole tournament and the frustration from not qualifying. Once you know there’s nothing else, it’s not that you don’t care, but it’s not as rewarding as you want.”

“Congratulations to Cuba,” Puerto Rico coach Carlos Cardona said. “It is always hard to play for third place. It’s not only that we were tired from yesterday, but the fact we haven’t had any break. We’ve played six matches in six days. It was not only the fact that it was five sets, but the fact that we almost made it to the final and we didn’t make it. Sometimes it’s hard to get motivated, even though you know you should be. Cuba played very well. We are going to rest because we have three veteran players that came back from overseas and two more who are rehabilitating at home. Assuming that the U.S. wins the final match. If that’s the case, we will be leaving for Japan.”