Serbia notched a straight sets victory over Puerto Rico (25-19, 25-17, 25-18) to remain unbeaten on the fifth day of action in the FIVB Men's World Olympic Qualifying Tournament at Tokyo Metropolitan Gym on Wednesday. 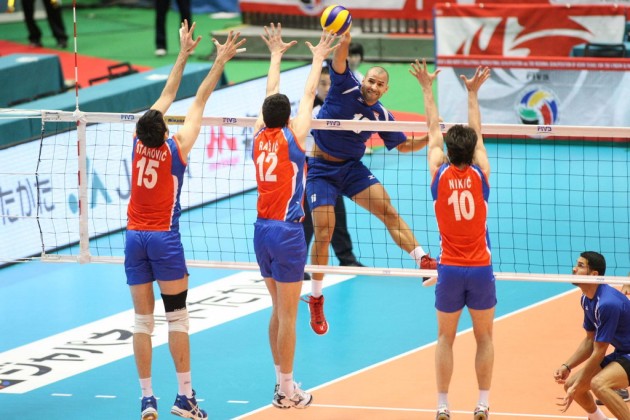 The European champions moved to 5-0 with the triumph, while Puerto Rico remained winless at 0-5 with the defeat.

Ezequiel Cruz had a match-high 14 in the loss for Puerto Rico.

Serbia overpowered the Puerto Rican side with superior skills in blocking, serving and passing. The Serbs have lost only one set in the competition, while Puerto Rico has won only one set.

Ulises Maldonado sent a spike wide and Serbia took a 5-4 lead in the first set. A reverse dink by Vlado Petkovic made it 7-5. Starovic‘s spike put Serbia up 8-5 at the first TTO. Maldonado fired a spike into the net and Serbia went up 10-7. Cruz‘s spike pulled Puerto Rico within a point at 11-10. Milos Nikic‘s spike made it 15-12 and a block by Vlado Petkovic gave Serbia a 16-12 lead at the second TTO. Maldonado‘s spike took it to 18-15. Bojan Janic rose for a spike to make it 20-16 for Serbia. Another spike by Janic put Serbia within two points of the set at 23-17. Serbia took the set 25-19 with a spike.

Starovic‘s spike saw Serbia gain a 5-4 lead in the second set. Nikic‘s spike put Serbia on top 8-5 at the first TTO. Starovic delivered another spike and it was 10-7. A service ace by Leonardo Aquino put Puerto Rico within two at 13-11. Starovic‘s spike sent Serbia into the second TTO with a 16-14 margin. Starovic‘s block made it 20-14 for Serbia. Uros Kovacevic‘s spike gave Serbia a 23-17 lead and Marko Podrascanin followed with a service ace for set point. Aquino sent a spike into the net and Serbia had the set 25-17.

Figueroa‘s service ace put Puerto Rico up 7-6 in the third set. A dink by Janic made it 8-7 for Serbia at the first TTO. A service ace by Aleksandar Atanasijevic put Serbia in front by five points at 14-9. Janic made it 15-11 with a spike. A spike by Atanasijevic gave Serbia a five-point advantage at 16-11 at the second TTO. Milan Rasic pounded a spike and Serbia was on top 20-15. Atanasijevic‘s spike took it to 23-16. A nice dink by Nikola Kovacevic gave Serbia match point at 24-17. Podrascanin ended the affair 25-18 with a spike.

Serbia will meet Iran on Saturday, while Puerto Rico take on Japan.