CL F4 W: Caprara: “All four teams are strong and have chances to win”

On the eve of the Final Four tournament of the 2015 CEV DenizBank Volleyball Champions League - Women, Turkey’s Anadolu Ajansi interviewed Giovanni Caprara, the head coach of Eczacibasi VitrA ISTANBUL, one of four teams battling for continental club honours this weekend in Poland. 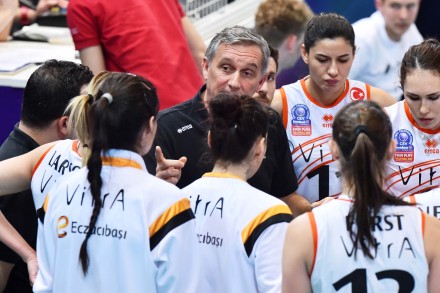 “The teams participating in the Final Four are strong and all of them have a chance to be the champion,” Caprara said.  “We are happy to be in the Final Four after beating Volero ZURICH, which is one of the strong squads in Europe.  This situation is already good for us, however, the important thing is to attain a good result at the Final Four in Szczecin.“

Asked about the chances of a Turkish team to win the trophy, Giovanni Caprara added that “while all four sides are very strong, in the last 4-5 years Turkish teams have become really powerful.“

Furthermore, Caprara reminded that Eczacıbaşı Vitra will play against VakifBank ISTANBUL in their semifinal match of the Final Four after having already beaten that same opponent twice in the Turkish league.  “I guess VakifBank will play with a different line-up in comparison to the matches in the Turkish league,” he added.  “Because of foreign player restrictions, they could not play with all their international stars domestically.  However, all of them will be on the court in Szczecin.  In other words, we will see a very different team.  Therefore, it will be a different match.“

“I had a chance to meet up with the head coach of VakifBank, Giovanni Guidetti, before the Final Four.  He is a smart man.  He is trying to show that his team is not the favourite in this tournament.  However, all of us know that they are the favourites again, because they have already won this trophy twice and have so much experience and knowledge about this tournament.”

“I am very happy to work at Eczacibasi VitrA.  The only problem is that I am far away from my family.  We are having a very good season, one of my favourite,” Caprara concluded.