One thing that makes the upcoming Final Four tournament of the 2015 CEV DenizBank Volleyball Champions League - Women more special and unique is the curious fact that, although the participating teams come from three different countries, they are all mentored by Italian coaches. The four volleyball specialists and countrymen know each other very well and are even friends off the court, but they have no intentions to show mercy to each other when they lock horns on the court of the Azoty Arena in Szczecin to battle it out for top continental honours. 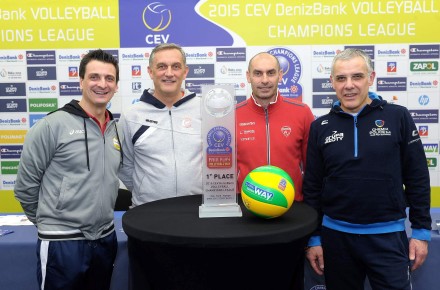 “There is always a fantastic atmosphere in Poland.  We want to show the best volleyball possible.  We already did and that is why we are here,” stated Giovanni Caprara, head coach of Eczacibasi VitrA ISTANBUL.

His colleague, compatriot and opponent in Saturday’s second semifinal Giovanni Guidetti, head coach of VakifBank ISTANBUL, agreed: “I am sure the Polish fans will turn this into a great spectacle,” and expressed his desire to win the trophy again:  “Our road to this Final Four was very complicated.  The games against last year’s winner Dinamo KAZAN and the Turkish team of Fenerbahce Grundig ISTANBUL were very hard, because those teams are very strong.  But in sport what happened yesterday does not matter, it is what happens tomorrow that is important.  It does not matter that we have already won the cup, we want it again.  My colleagues and I are good friends and we adore each other, but when it comes down to who wins on the court, this does not matter – we all want to win.”

As far as the first semifinal on Saturday, both sides expect a tough encounter.  “We know that it will be a very hard match for us, because we play against the home team,” said Carlo Parisi, head coach of Italy’s Unendo Yamamay BUSTO ARSIZIO.  “It will be hard not only because Chemik POLICE is a strong team, but also because there will be a lot of fans supporting them from the stands.  For us, it is good to play in this kind of situation and we want to play our best and take our chance in this game.”

“I expect a great show and volleyball at the highest level.  We want to show the same volleyball we showed in the pool stage,” commented Giuseppe Cuccarini, the mentor of Chemik Police side.  “The situation when a team does not have to play in the playoff stage happens regularly, so we need to prepare for it and face it.  It is Easter and it would be great to spend it at home with the family, but we are professionals and we are here to play, so this is not a problem. I have got a lot of former players and friends in the other three teams.”