Great Britain captain Lynne Beattie believes head coach Audrey Cooper has plenty of food for thought as she mulls over her final selection for the Olympics.The GB girls raised their game against the men's British Select team, who had replaced African champions Algeria, at the Kelvin Hall in Glasgow but went down in four sets once again 17-25 25-19 25-27 18-25. Beattie had a strong match and had more than a few decent blocks and pick-ups as the girls traded points with opponents who had plenty of hitting power with the Scottish G-Force of Glissov, Galloway and Green testing their block. 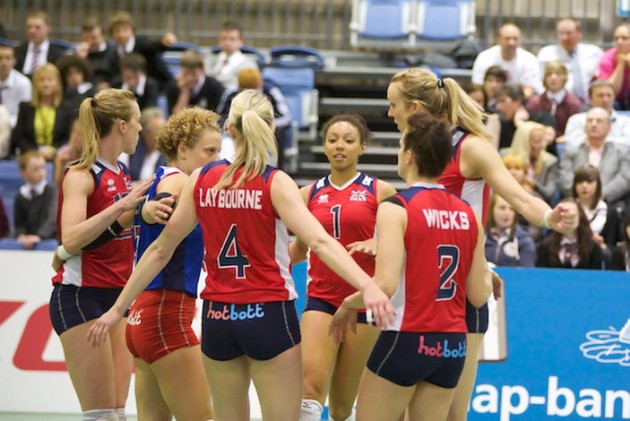 After taking the second set in thrillling fashion with a superb spike from Savannah Leaf on set point, the GB girls had two set points in the second set before losing it 25-27.

The GB girls Team GB Womentraded point for point in the final set but the select team pulled away in the final stages of the set.

Beattie believes the two matches against the men – put together at the eleventh hour – gave the girls a useful workout ahead of the Games.

“We had a bit more focus (in the second match) and the team gelled a bit better,” she pointed out, “We handled their serves which allowed us to run our offence and the speed of our offence caused them some problems in their block-defence.”

GB Women v British Men‘s select “That gave us some momentum and that’s the style we want to play against the Russians. They are big girls but they can’t move fast so we want to try and catch them off-guard. Hopefully, if we can work on that then we can cause them some problems.”

“It was a bit disappointing that Algeria didn’t come as we were looking forward to the challenge and it’s a team we are playing at the Olympics. If we had beaten them, it would have been a good psychological advantage going into the Games but we have to take the positives from this weekend.”

GB Women v British Men‘s select “Playing against the guys gave us other challenges that we wouldn’t have had if Algeria had come so I you have to take what you can from every touch of the ball as we build towards the Olympics.”

Cooper now has to cut two players before naming her final squad and it is not a choice Beattie envies her coach.

“It’s tough on the coaches and it’s really tough on the girls. We’ve been together since 2006 so to lose two at this late stage is going to be an absolute killer,” she continued.

“But, unfortunately, that’s sport and we have to move on as quickly as possible. It may seem harsh but it has always been the case that there is going to be a final 12. Everyone has put their bid in to be selected and everyone has done a great job so it’ll be tough.”

SupportCity of Glasgow Council provided invaluable support to allow the two matches to go ahead and there were healthy attendances on both days. The matches were sponsored by hotbott, their logo featuring on the girls’ shorts, and the British Volleyball Federation are grateful for their contribution to the occasion.

RUS W: Kosheleva will remain in Germany for a week – Fadeev