Russia is brand new team since the World League! Vladimir Alekno inserted some new power to his players after taking over position of a head coach. And what is the result of that? Russia has 4-1 score at the World Cup in Japan and managed to beat Iran in straight sets (26-24, 25-18, 25-20)! Incredible... 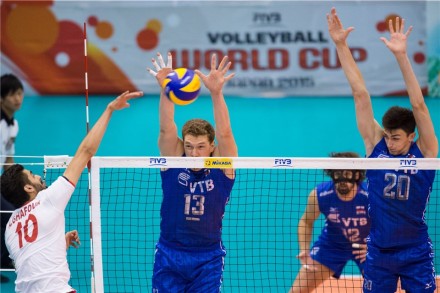 Iranians were much more determined at the start, getting expressly 3-0.  They kept the momentum in the next several points, but Alekno’s players gathered together and leveled at 9-all. With Marouf’s diversity in setting, Iran quickly regained a three-point gap 12-9. Point by point and the Asian side was closer and closer to claim the first set 17-14. But, since then, Russia scored eight and Iran only one point 22-18! Iranians just couldn’t remove Muserskiy from a service line! If it wasn’t an ace it was a missile that prevented rivals to organize a proper attack. Mirzajanpour boosted his team to 22-21, but Muserskiy was ruthless 26-24 for Russia.

It was the one man show by Mikhailov in the beginning of Set 2! He scored four of first six points from his team and Russia had 6-4, soon 8-6 at TTO. Iranians were certainly frustrated since they couldn’t level besides playing astonishing defense and serving strongly. The problem was in a poor realization of counter attacks. But it changed on 12-11 for Russia when Iran finally claimed lead 13-12 with important role from Mousavi. It was in vain as Ghaemi wasn’t focused, sending outside two consecutive spikes, 20-16 for Russia. When Mirzajanpour and Mousavi  also started to make errors (22-16), it was all over in this set. Iranian coach Kovač was furious on a time-out! Russian players didn’t have to do anything, just to let the opponent beat itself 25-18.

We have seen a brand new Iran in the third set, but… Mirzajanpour, Ghaemi, Mousavi spiked like hell while they all digged excellently in defense. With Marouf’s brilliance in organizing attacks, Asians had 4-1, 8-5, 11-8. Russians were knocked down, but recovered and equalized at 16-16. Ghafour was blocked twice in a row, while Sivozhelez brought fresh energy to the court. Muserskiy was there when his team needed him mostly, 23-18 for Russia. Volvich converted quick attack 25-20 for Russia.

Dmitriy Muserskiy was the top scorer in Russia with 20 points. Amir Ghafour and Mojtaba Mirzajanpour had 12 each in Iran.

WC M: Japan is tough, but Italy knows how to deal with these teams

GBR: Olympic gigantism is special in its...