Algeria’s captain Lydia Oulmou enjoyed in London her second appearance at the Olympics and even though the group ended up by losing all of their matches at Earls Court, she won’t forget this experience that quickly. 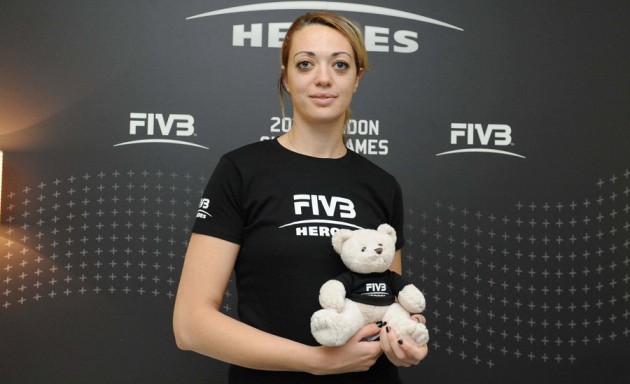 “Algeria debuted four years ago at the Olympics but actually this group has been together since 2001, as we were brought together by the coaches responsible for the development of the national team. And we have gone quite a long way in the past ten years by participating in all major African and international competitions, but the Olympics are quite evidently very special to all of us”.

Actually some young players were also included in the group for London 2012, thereby laying down the foundations for the next generation that will hopefully extend that positive tradition and qualify for the next Olympics in Rio de Janeiro: “We have some girls who at 17 years of age eventually got the chance to participate in the Olympic Games as other, more experienced players were injured or could not join the group. That was a unique opportunity and hopefully this experience will motivate our youngsters as they are supposed to take over the leadership of the group for the next Olympic quadrennial”.

Oulmou has been playing in France for the past 8 years and is set to move from Istres to Valenciennes for the coming season, thereby still being part of the first division. “Of course my stay in France has helped me mature and develop as volleyball player and I wish I could share that knowledge and experience with all other members of the national team, with my priority being the young girls that will be carrying the hopes of our volleyball family for the years to come. And actually I have already partly succeeded in this: I was the first Algerian and African player able to perform a backside quick attack and recently, back home, I was extremely glad to see that even some young players are able to do this quite well. It means we are gradually developing, even though we still have much to do to be able to compete with the international elite”.

With their Olympic campaign being completed, Team Algeria will re-start its activities by joining the next African competitions and trying to qualify for the 2014 FIVB World Champs in Italy. “Our archrivals in Africa are Kenya but there are some other teams that have been progressing. Volleyball still has a long way to go in Africa; it is not simply about money, it is also about motivation and the ability to work on long-term and ambitious projects. It is up to players, coaches and volleyball officials to understand that you can’t stop your development as soon as you finish first at the African Championship. You need to identify other goals, if you are happy with being the top-ranked side in Africa, our teams will never compensate for the gap that is currently separating African volleyball from the best sides in the world”.

Oulmou is part of an Algerian delegation that comprises 39 athletes competing in 12 sports. “We enjoyed getting together with other sportspeople from our country there at the Olympic village and we even got the chance to cross our ways with some of our compatriots we got to know four years ago in Beijing, including the judokas that claimed two medals for Algeria in China. We share the responsibility of representing our country and also the same passion and devotion to the sport”.
She lists tennis star Rafael Nadal as her favorite sportsperson: “I love his fighting spirit, he never gives up, and he is an outstanding athlete as well”, while US American wing spiker Logan Tom is the volleyball player she looks up at. As for Algeria’s stars, 1992 Olympic champion Hassiba Boulmerka remains quite evidently an idol also for Oulmou. “She was the first Algerian woman to win gold at the Olympics, and she opened the way for many more to follow in her footsteps, thereby testifying that even though you may be confronted with the lack of expertise and financial constraints, you still have the chance to fulfill your dreams and make it to the top if you show strong motivation and you work hard”.

Lastly, is there any message that Lydia can convey from the Olympic arena to Arab women who may sometimes find it difficult to get actively involved in sport? “As you have seen here in London, we have been playing with an outfit that fully corresponds to the standards that are adopted in other countries. This means that we were free to make our choice; in Africa as well as in other Arab countries, there are girls that are sometimes playing by wearing special stuff to comply with the requirements set by their religious beliefs. However, in Algeria as well as in other neighboring countries, this is not a major concern at all. Actually I only regret that many volleyball players retire from competitive sport as they get married quite early, so they leave the arena at a young age. My wish is that even though we lost all of our matches here, we can set the tone for many more girls to get involved in volleyball, so that one day we will be able to compete, on equal terms, with the top stars you have seen in action here at Earls Court”.