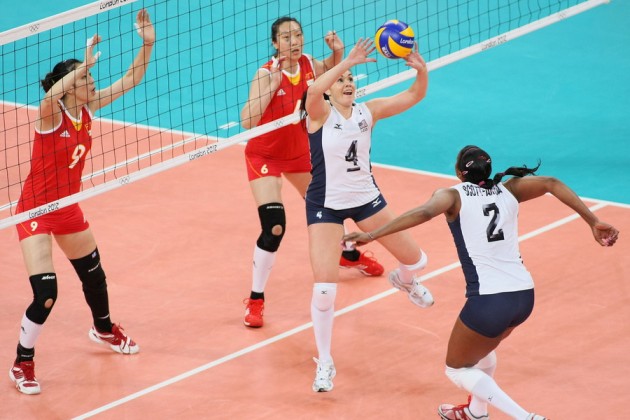 Lindsay spent seven of her last eight years, with the exception of the 2008/2009 season, playing in Italy with Pesaro, then Novara and eventually in Villa Cortese in the last three Serie A seasons. She played really well but I remember that in a few matches she lost the control of the game. Setters know very well that this may happen and that the coach will then take you off the court.

In London however, she has been outstanding. In each rally I saw she perfectly controlled her team. She is fast and precise with every ball she plays, no matter what kind of set it is or its distance or the zone she targets. Particularly her quick ball for the spikers in zone 4 is incredibly fast and really impressed me. Here in Earls Court she had the guts to find even difficult solutions to free her attackers from the opposing block. Ok, USA have great attackers…but she’s playing like a Swiss watch.

Lo Bianco has some problems with her back. Without knowing it from the Italian press, I could have never guessed that. This means that she is playing extremely well whilst hiding at the same time some physical problems. She always thinks clearly and that what is making a real difference for the Italian team. When things are not as expected or turning for the worse, she stays as a steady reference for the team. She has a strong personality to pull along the entire team.

When you see a setter showing this type of charisma, you can bet that her team will aim for the podium. Someone may think that since Berg and Lo Bianco are not tall players, they might not know how to block taller opponents. Setters have good hands. They know how to place them, controlling zone 2 of the net, and sometimes they can block even better than their teammates. One thing is for sure, Berg and Lo Bianco are never the weak link of their defense system.

OG W: USA finish with spotless record in Pool B