ECJ M: “We have to kick-start the breakthrough of Volleyball in Denmark” says Danish captain Peter Trolle Bonnesen

The 2012 CEV Junior Volleyball European Championship set to start tomorrow in Randers could be the much needed step in the right direction to promote and enhance Volleyball in Denmark. That is the hope from the captain of the Danish junior national team Peter Trolle Bonnesen. 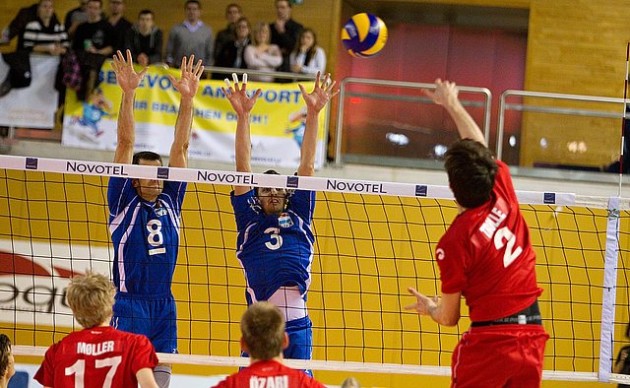 He has tried a variety of different sports, but Volleyball is the only sport that has kept the interest of the 208 cm tall captain of the Danish national team. Peter Trolle Bonnesen quickly discovered his skills for the sport, which also made it much more fun to play.

“I don’t like contact sport where you have to be rough towards each other. You do not have to worry about that in Volleyball. Furthermore, I like the high pace in Volleyball. And everything in Volleyball matters. A football match can easy end 0-0 and you get left with a feeling that the match never really went anywhere. In Volleyball, however, every ball counts in every duel. You will always find a winner,” he says.

It has been now 12 years since he started playing Volleyball, and now Peter Trolle Bonnesen is going to play the European Championship on home ground. This is a challenge that he is very much looking forward to.

“There can be a big difference in youth teams. Traditional strong teams can have a bad year. Previously we have played on the same level as the Greeks that we are going to meet at this year’s Junior Championship. The Greeks were one of the teams that clearly qualified with no doubt to this year’s Championship. We are not far behind them,” he says.

Peter Trolle Bonnesen strongly believes the Danish team can qualify from their pool for the next round of the competition in Gdynia. “It all depends on which team has improved the most. Hopefully, since we have been together as a team for a long time, we will have improved the most. It is the first time that a Danish team has been together for a whole year. This means that all the preparations have been great.”

The Danish captain hopes that with Denmark hosting both the Junior Championship this year and the men’s European Championship next year, where the semi-finals and finals will be played in Parken, this will raise the Danes’ awareness and interest for Volleyball.

“It lies deep within the Danish culture to watch football and handball. Volleyball is an extremely popular sport around the world but just not here. It is a long and slow process to gather people for Volleyball. I think that we need a miracle story to happen before the Danes will start noticing Volleyball. We need to win something big. That will create a breakthrough. So now all we need to do is to make sure that this miracle happens”.