China, runners-up at both the 2010 Asian Cup and the 2011 Asian meet, and the well-trained India, currently world No.30, highlighted the day when the pool round-robin preliminaries came close. 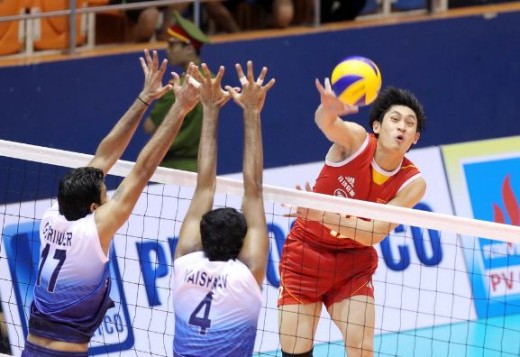 Against the Indians, China fielded a strong line-up with the likes of hard-hitting Wang Chen, who scored a match-high 20 points in the previous match against Australia, and the 199cm-tall Zhong Weijun.

In the opening set, China got off to a great start to race to a 16-10 lead, thanks to Wang Chen’s spectacular cross-court spikes and the high-wall blocking by the 206cm Liang Chunlong and the 200cm Geng Xin. China took the comfortable set 25-17.

Conceding one set, India pulled their game together to capture the pole position 13-11. Powerful mid-court attacks from Gurinder Singh and effective blocks by R. Vaishnav and Gurinder Singh worked out impressively to help India advance 24-19, needing only one crucial point to wrap up the set.

However, the Chinese were just never-say-die. They clawed their ways back to splendidly save four set points to come close at 23-24. Brilliant Gurinder Singh ended the rivals’ determined effort by producing a sharp shot which landed right on the sideline. India took the second set 25-23.

The third set was very thrilling from the beginning when both sides gave it all-out. China held their nerves when the rivals opened up with a series of fierce attacks. At 14-14, the Chinese took the golden opportunity when the rivals displayed an unforced mistakes-riddled game, puncturing the Indian defence with exceptional spikes to clinch the set 25-17.

Leading 2-1, China still gained the upper hand initially to lead 11-8 in the fourth set, while India patiently waited for counter attacking opportunities. In a short while after the service exchange, the Chinese improved on their defensive tactics by effectively and efficiently blocking the aggressive mid-court spikes from Gurinder Singha to stretch the lead to 16-9.

To revive their fortunes, India sent in Sannjay Kumar, who won the Best Server Award at the previous edition two years ago in Urmia, Iran, but their intention was shortlived when the Chinese stormed on their mighty attacks.

After taking the commanding 24-16 lead, China allowed India one more point from an erratic attack of Zhong Weijun before Liang Chunlong hit a devastating spike which went unanswered. China won the set 25-17 and the match.

Zhang Chen scored a match-high 16 points for China, while S. Prabagaran emerged as the top scorer for India after bagging 15 points, all of them from deadly spikes.

Despite the loss, India’s head coach G.E.Sridharan said that he was satisfied with the way his team played. “It’s a good match and we played well. It’s just because our blocking did not live up to our expectation and that’s why we lost.“

“In a volleyball competition, it’s impossible that different teams will play the similar style with the similar standard. That’s why there are win and loss in each game. In the Asian Cup here, Japan, South Korea, Iran and Australia are very strong. My team are also good, but our reception and blocks did not go the way we wanted.“

“We next probably take on South Korea in the do-or-die match. The win will give us a chance to play in the semi-finals, but things will turn sour for us if we happen to lose that match. Our top priority in this tournament is to play in the final showdown. However, to reach that target, we have to work much harder in the remaining matches,” he added.

At the conclusion of the pool round-robin preliminaries, China had two wins against one loss to Iran to finish second in Pool B, while India came in third place in the pool with one win against two losses.

Want to be the next to win a great game shirt?