As expected, the opening match of the second round European qualifier taking place in Apeldoorn was a walk-over for the home team. Within one hour and seven minutes the Netherlands finished their match against Denmark in straight sets (25-12, 25-11, and 25-9). “It is hard to start against a team that gives so little opposition. Tomorrow, against Ukraine, we expect to play a true match”, said Dutch coach Gido Vermeulen afterwards. 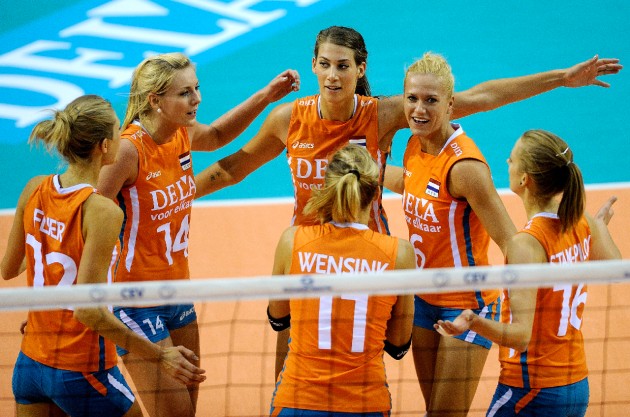 In the opening set, Denmark only kept track in the first phase (4:3). At the second technical time-out, the margin was ten points already for the home side. With Robin de Kruijf on service position, the home team scored seven points in a row (24:11) and the famous fast attack of Caroline Wensink ended the first set.

In the second act, the Netherlands already led by seven points at the first obligatory time-out. The Danish women had no answer to the solid and quick play of the Dutch. A long rally was closed by a well-placed spike of Manon Flier (14:3), who started in the Dutch base today after a period of absence. Every point the Danish scored was celebrated loudly, even the two smashed out balls of the Netherlands (19:7). De Kruijf brought the Dutch their set point which was cashed by setter Kim Staelens.

With Laura Dijkema on serve, the team of Vermeulen walked from 3:2 to 12:3 in set 3. Danish coach Sven-Erik Lauridsen utilized his second time out at 12:2 already, but it did not sort the effect he hoped for. With four Dutch substitute players between the lines, the Dutch train kept on running and Staelens ended the match with a direct service point.