The minister of sports of Costa Rica, who also presides over his country’s National Volleyball Federation expressed his approval to the continued efforts made by the current administration of FIVB to generate the development of the sport discipline throughout the world. 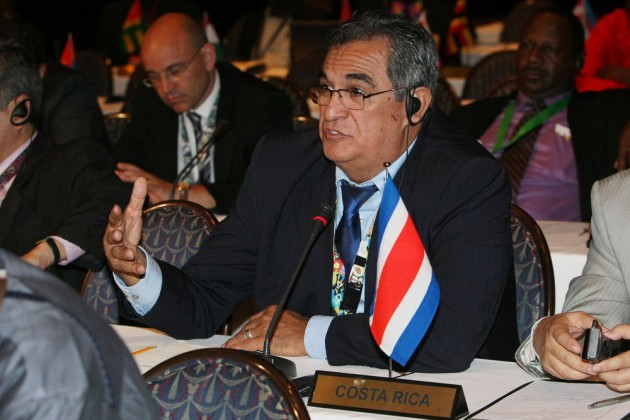 William Corrales, was one of the participants from 126 countries in the dynamic FIVB Workshop for National Federations Category I and II, held at Disneyland hotel on Tuesday on the eve of the three-day FIVB World Congress.

“The tools that FIVB are providing to us are very important to complement the effort that it has been done for the last four years,” Corrales said. “This should serve to strengthen our actions to get from the governments the investment to go along with the efforts of FIVB.”

Corrales, a former legislator in the Costa Rica Congress, is quite impressed with the results and objectives of the workshop organized by FIVB before its World Congress for a second time. The first one took place in Rome, Italy in 2010.

“The workshop brings substantive elements of information badly needed by our national federations,” he opined. “It is the tool required to develop our working platform and to obtain from the authorities better resources to improve the conditions within our countries.”

Corrales praised also the activities of the FIVB development centers and in particular the campaign of NORCECA president Cristobal Marte Hoffiz “whose actions practically has forced us to participate in all the events and also organize a few of them.”

Costa Rica is the leading volleyball country in the Central American zone with its women’s teams having qualified twice to the FIVB World Championships in 2006 and 2010.

They are also the most dominant force in beach volleyball in both genders in their region and the national federation organizes an annual national circuit with a good number of sponsors and benefits also from good national media coverage.

“FIVB is doing relevant efforts to help the emerging national federations and it is the common hope that the assistance will be increased in the near future,” he concluded.

Several representatives of NORCECA countries expressed their ideas and presented their problems and necessities during the one-day workshop. Among them: Don Cornish of Bahamas, Javier Ortega of Panama, Wilbur Harrigan of Antigua, Ralph Lord of Grenada, Allan Sharp of Belize and Felix Sabio of Honduras.