Al-Arabi Doha evened its win-loss record at 1-1 in Pool B of the Men’s FIVB Club World Championship following a 3-0 over Zamalek. Christian Pampel topped the local while Reda Haikal was the only bright point of the defeated side. 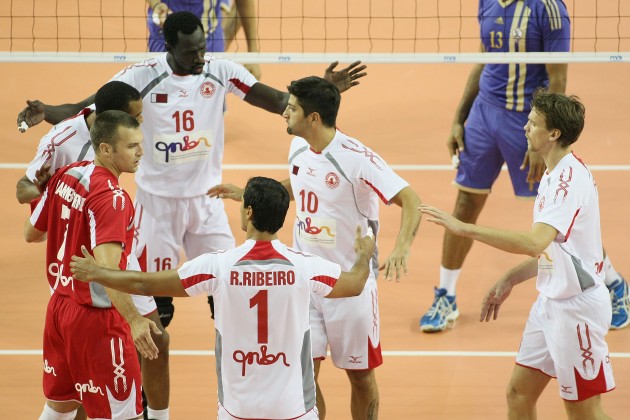 Al-Arabi only made 8 unforced errors during the match compared to 26 by Zamalek. The winners also held the advantage in blocks (8-6) and in service winners (7-5).

Al-Arabi Doha led 8-7 in the first set thanks mainly to the errors of the opponent. They opened a four-point lead 16-12 at the second TTO, relying on the solid spikes of Christian Pampel. One block by Ribeiro Renan followed by an ace from Ibrahim expanded the gap to seven points at 23-16. Al Arabi won the set 25-19 despite the good spiking from Zamalek’s Reda Haikal and Mohamed Badawy.

Spikes by Al Bakhet and Pampel around the kill of Zamalek’s Seif Elnasr gave Al Arabi an 8-6 lead in the second set. Pampel continued red-hot forcing a time-out at 9-6. Al Arabi was in front by five points at 16-11 at the second technical stop. With the score 19-13 Zamalek’s coach called a time-out. The course of the set continued the same as Al Arabi ended prevailing by a nine-point difference at 25-16 with the block of Matti Ovainen closing the actions.

Two aces by Haikal put Zamalek in front 8-5 in the third set. The Egyptian club let the advantage to escape with several sloppy plays and Pampel gave Al Arabi the lead at 11-10 with another big hit. The Doha club opened the gap to 16-13 at the second TTO. The big Ibrahim was running in high gear at the end for Al Arabi. Pampel landed one more for match point at 24-19 and the match finished 25-20 with the block by Oivanen.