The 2012 International Congress on Volleyball Training finished this weekend in the Spanish city of Valladolid after three days whereby over a hundred participants enjoyed the teachings provided by well-known and top-level coaches. You can read all relevant news from volleyball world on Worldofvolley.com. 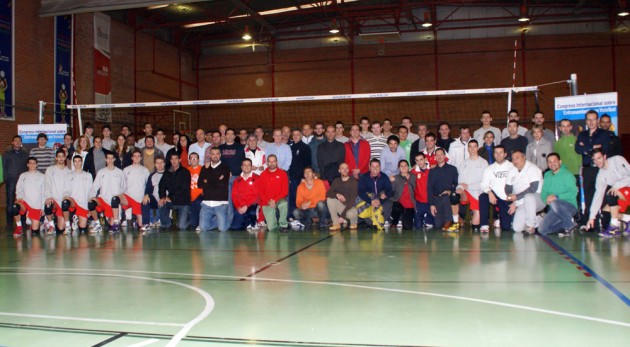 The city of Valladolid hosted the eleventh edition of the Spanish International Congress on Volleyball Training. The coaches Marco Mencarelli, Raul Lozano, Francisco Hervas, Ricardo Maldonado and Jose Miguel Serrato shared their knowledge and experience on different topics dealing with the preparation and technique of modern Volleyball.

The President of the Royal Spanish Volleyball Federation and CEV Vice President, Mr. Agustin Martin Santos, inaugurated the Congress on Friday afternoon and stressed the importance of the event as well as the need for activities such as the one held in Valladolid to promote Volleyball and its progress. After the kickoff, the presentations started, with the participation of Spanish women’s national coach, Francisco Hervas, and one of the keynote speakers of the Congress, Argentine Raul Lozano, who focused his first lecture on the analysis of K-1 and K-2 complexes.

The sessions on Saturday began with the discussions conducted by Spanish junior men’s national team mentor Ricardo Maldonado and Italian Marco Mencarelli who premiered at the conference with an intervention that analyzed the reception system. In the afternoon session, the presentations by Spanish junior women’s national coach, Jose Miguel Serrato, continued the subsequent analysis of Marco Mencarelli and Raul Lozano, who catalyzed the interest of attendees in two conferences that versed on reception and attack systems. The continuation of the dissertations by Marco Mencarelli and Raul Lozano finalized the Congress on Sunday; a collective panel that discussed the structural and technical strategies of modern Volleyball put the official end to the program of the Congress.

All the participants emphasized the high quality of the presentations and the exceptional level of the teachings presented in the three days of the event. The eleventh edition of the most important Volleyball Congress was organized by the Royal Spanish Volleyball Federation in close cooperation with the Spanish Olympic Committee and the Volleyball Federation of Castilla y Leon region.