Juraj Mokry is currently one of the most respected referees in international volleyball. It’s been more than 13 years since the former player took up the whistle following a series of injuries that ended his career on the court. Read the latest news from volleyball world on worldofvolley.com. 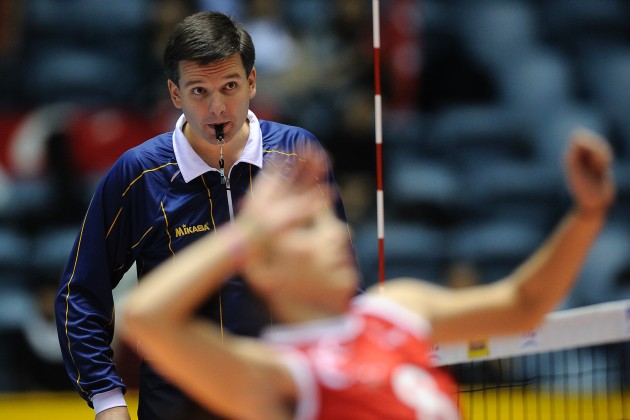 Here is some of what he said:

How long have you been an international referee?

“I graduated from the International Course in July, 1999 in Tunisia, and I met the requirements for appointment as an international referee in 2000. My application to become an FIVB official was approved by the Governing Board in 2001.”

Why did you decide to go this route?

“The reason I decided to become a referee was related to injuries I had as a junior and just as my senior career was starting. During a recovery period, I began to learn about refereeing from Marian Kovacik, Julius ?alog and coach Joseph Ugróczymu. As for why I became an international referee, I was probably in the right place at the right time. I caught a generational change and the offer from Ivana Majer?ák to go on a course was one I could not refuse.”

Do you have a match you will never forget?

“There are a lot of matches that have stayed in my memory. Nevertheless, one that was huge and unexpected was my participation in the ME Women’s Final in Ankara in 2003, when I was still a relative newcomer. I had to make some difficult calls in that final. It was an important development in my career as a referee, and it seems I passed the test.”

“Again, though, I remember many other matches. All three Champions League Men’s Finals are certainly among them (2006 in Rome, 2009 in Prague and 2011 in Bolzano).”

Do you remember your first match?

“Of course I remember. It was in Puchov, in November 1999. It was the CEV Cup, and I served as the second referee alongside Frans Loderusovi from the Netherlands, who is still an FIVB referee. The first foreign trip I took was in January, 2000, with Peter Fable, for the Champions League in Friedrichshafen, Germany.”

Can you still enjoy volleyball while you’re judging it?

“Absolutely. Although it must be admitted that, as a viewer, I end up looking through the prism of a referee and evaluating matches. Many times I focus on details that do not register with ordinary viewers. Anyway, I have always been very pleased to officiate the big tournament events as much as to watch as a spectator.”

Alongside your work as an international referee, you also have a second job in pharmacology. How do you combine it all?

“After I graduated from school I immediately joined the Department of Pharmacology at Jessenius Comenius University and have been working there ever since. I must admit that deciding to officiate in volleyball has significantly affected my other professional career. The choice to work in a ‘non-clinical’ department at the university was influenced by the greater flexibility of working hours and the number of days of leave I can take, which is essential for my role as an international referee. I need time fully dedicated to volleyball.”

“I should also note that without getting so much support and understanding from my family it would be very difficult to do as much as I do. Hopefully in the future my wife and children will not hold my relatively frequent and sometimes prolonged absences from the house against me. Thank God there are modern means of communication to help us bridge the long distances!”

Do you have favorite foreign colleagues to work with?

“There are a lot. It’s quite fascinating, that in the short time we spend together on trips, we form friendships reaching across borders and sometimes across oceans, and keep them for a long time. It’s wonderful to meet up with someone, after a month or after ten years, and have lots to talk about. Being on the same wavelength is important in our profession – it’s just like being in a family.”

What do you most like about your work as a referee?

“Decision making is always a challenge. If I said that it’s easy and straightforward, I would certainly be lying. This job requires regular training and up-to-date knowledge. Sure, there are situations that we’ll get wrong, but it is very important to be able to judge ourselves and learn from mistakes. And that is perhaps what fascinates me; no game is the same, every situation is testing us – both our physical abilities (vision, perception, reactions), but also psychological (withstanding stress, having the ability to deal with the psychology of the game).”

“Certainly it is also nice when, after the game, you pat each other on the back, shake hands and say: “well, now you have made it.” This feeling is priceless …”

“And last, but not least, the many friendships that I have established – and kept – over the years are a great reward.”

GER M: Friedrichshafen a bit behind