Jastrzębski Węgiel's official website announced that Thomas Jarmoc and Simon van de Voorde will defend the colors of that team in the season 2013/2014. 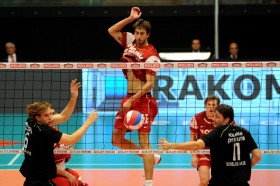 Thomas Jarmoc is a 26-year-old who plays as the receiver. He signed a one-year contract with an option to extend for another year.

Thomas has both Polish and Canadian citizenship, he was born in Canada, but his parents are Polish. In previous years he was a member of  Euphony Asse-Lennik, VfB Friedrichshafen and AO Kifisias Athens.

The second reinforcement for Jastrzębski Węgiel in the season 2012/2012 is Belgium international Simon van de Voorde. The 24-year-old measures 2.08 meters and plays as the middle blocker.

GP: Karch Kiraly – “We got some great lessons against Brazil”