Only one PlusLiga team failed a meeting in European cups. Belchatow lost 3:0 in Tours and the players of Skra received two yellow cards in row. 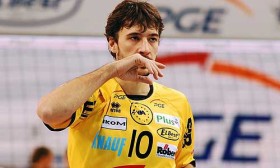 In Champions Legaue Zaksa Kedzierzyn met with Spanish champion – CAI Teruel. It was quite short game, because Zaksa was well prepared tactically and did not make many mistakes. Hosts quickly reached a big advantage (10:6, 13:7). It was a good game in block and service and the first set finished in a short time. Next part was a bit more difficult for Kedzierzyn, because Teruel improved their game in defence and after service point they even was leading 16:15. However, Zaksa showed their class and quality and after a while the game result was 2:0. After that it was just a matter of formality. Zaksa was consequent and after the third set Kedzierzyn Kozle could be sure of advancement to play off round. The best scorer of Zaksa was a middle blocker, Juri Gladyr (15 points).

Thursday was not a good day for Skra Belchatow and their fans. Skra wanted to ensure their leadership in group, but they were not able to fulfill conditions that were set by the opponent. French team Tours VB was playing nice, clever and fast. Their setter, Rafael Redwiz (who used to play in Asseco Resovia) showed his big talent and imagination. On the other hand, Skra made a huge number of simple mistakes and besides Mariusz Wlazly, nobody else helped Belchatow – both Kurek and Winiarski had serious trouble in attack and the head coach, Jacek Nawrocki, couldn’t find a solution. In addition, players of Skra had trouble with keeping their emotions and after an argument with a main arbiter they were punished by two yellow cards in a row. Tours won 3:0 (last point was scored by service) and they have a great opportunity to win the group.

Asseco Resovia Rzeszow is playing in CEV Cup. This week they had a little trip to France, to compete with Arago de Sète. It was not an easy match, but Resovia did their homework. Hosts was leading through the whole set, but finally Resovia showed their skills and they won 25:21. They lost only second set (16:25), because of incredible number of mistakes (36 in whole match!). After lost part Asseco were concentrated enough to fight not only the rivals but also their own weaknesses. Olieg Achrem did a great job in attack (18 points) and it was a great help with winning a game with French team.

AZS Czestochowa and AZS Warszawa won their matches in Challenge Cup. Czestochowa is going through hard time this season (they lost 5 matches in a row), so it was justified to have some doubts before this meeting. The game with Fonte Bastardo Azores (from Portugal) was not so easy, but AZS was trying hard and they managed to win 3:0.

Konrad Pakosz, the president of AZS Czestochowa said: “This game was hard for a couple of reasons. We played for the first victory, in the difficult area, in front of loud public. But we played decently and twenty minutes after the game we were eating a dinner. This victory has a great value for us”.

AZS Warszawa also didn’t loose a single set. They met Mladost Marina Kastela (from Croatia) and they played very well in block and defence. Grzegorz Szymanski and Krzysztof Wierzbowski had a good day in attack and the first set was over. The second part started with a great game of AZS, because they were leading 6:1 and after that Warszawa didn’t let anything bad to happen. The last part was much harder, because Polish players did not keep concentration and their rivals were doing their best, but finally Warszawa finished this game winning 29:27.

Argentina: The Argentine boys’ youth team travels to Chovet and Gualeguaychu to play