Dinamo KAZAN claimed the first derby with their compatriots of Dinamo MOSCOW by besting the players from Russia’s capital city with the score of 3:1 (25-22, 25-21, 26-28, and 25-21) in what was their first clash for the Playoffs 12 of the 2013 CEV Volleyball Champions League. Read latest volleyball news on Worldofvolley.com. 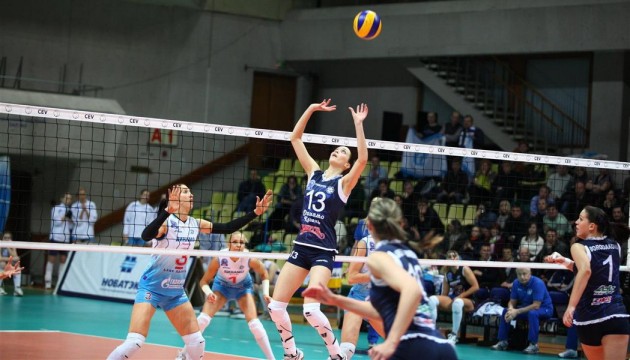 After losing twice to the side from Tatarstan in domestic competitions, Dinamo MOSCOW started out quite confidently showing great consistency in every single fundamental; however, by the end of the set things changed quite quickly as Jordan Larson-Burbach was attacking from every single position for KAZAN and the Tatar block worked well too to contribute the provisional 1:0 (25-22).

The game was extremely close in the second set but Dinamo KAZAN got to the front right before the final rush showing some great team work to pave the way for the 2:0 (25-21). As Dinamo KAZAN was setting the pace by the first technical time-out of the third set (8:3), it looked like the fate of the game was already written. However, Dinamo MOSCOW finally started playing more aggressively and after a very dramatic final rush with the score being regularly tied, Natasa Osmokrovic contributed a set ball for the home side and an error by Ekaterina Gamova sealed the final 28-26 for the hosts.

Still Dinamo KAZAN could impose their quality and tempo once more in set 4, controlling the score and playing superbly to claim that first match with the score of 3:1 (25-21).

“Our opponents played really well tonight as their serve and blocks were great, but we are happy with this win” singled out the team captain of Dinamo KAZAN Maria Borisenko (Borodakova).

“Next week we shall play much better than we did tonight and I believe we may have our chances to go to the golden set” said home mentor Svetlana Ilic. “Today we played good and our serve was not bad. However, we can play much better and I am sure we can achieve our goal”.

Marouf and Leon in action – One-handed...