The “Yeltsin Cup” hosted by the Russian Volleyball Federation in the city of Ekaterinburg came to a close on Sunday at “Uralochka” sports complex with the home heroines of Russia edging Italy 3:1 (22-25, 25-23, 25-14, and 25-18) in the final match that was attended also by the widow of Russia’s former President, Naina Yeltsin. This and other volleyball news read on Worldofvolley.com. 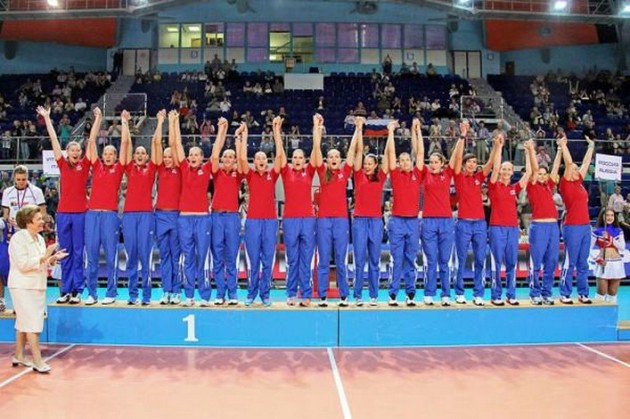 “For the past five days we have seen the teams fighting for every single point even though these were friendly matches” Naina Yeltsina said, “and I already look forward to the next edition of the tournament”.

Russia and Italy crossed their ways in the final match similarly to what had happened last year but this time it was the home side to have the upper hand in the end. Three players from the local club Uralochka were included on Russia’s starting six, namely Irina Zaryazhko, Viktoriya Chaplina and Alexandra Pasynkova. Some Russian mistakes helped the Italian side mentored by former world champion Paolo Tofoli claim the opening set (22-25). Russia nevertheless got back on track in the second set with Pasynkova pacing her side (17:14, 20:14) and helping the home heroines finish it off at 25-23. Russia dictated the pace of the game all the way though in the third set (18:11, 25-14) with Pasynkova, Natalia Obmochaeva and Maria Borodakova being the main forces at the net for the home side. Russia got to the front also in the fourth set (15:10, 18:13) and eventually it was a double block by Uralochka’s Chaplina and Zaryazhko that sealed the final 3:1 for the 2006 and 2010 world champions (25-18). Pasynkova top scored in the end for Russia with 19 points while Indre Sorokaite – born in Lithuania and debuting in Ekaterinburg for Italy’s national team – totaled 20 for the losing side.

“I am very happy with our second place here because Russia has a very strong team” Italy’s head coach Paolo Tofoli said. “Today we did show some problems in reception but I am generally quite happy with the way we performed in this tournament. This was a good experience especially to get ready for the upcoming Universiade in Kazan”.

“I am very pleased with the result especially as we had set the goal to win this home tournament before the start of the Universiade” adds Russian mentor Yuriy Marichev. “This group will travel to Kazan in one week and it is very important that before the Universiade they could win a prestigious tournament like the Yeltsin Cup”.