Our favorite Russian player of all time together with Sokolova! 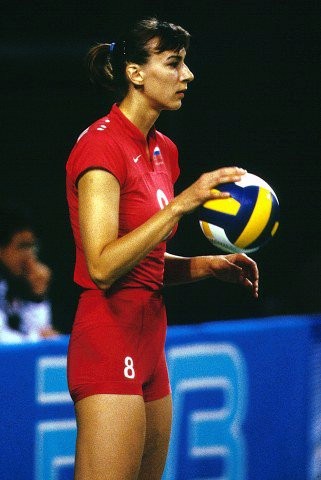 Polish website blokaut.net has reported that the most experienced Russian volleyball player from the 90s is reportedly back on the National Team! Her name has been added on the roster for the upcoming European Olympic Qualifier Tournament sometime in May.

Zhenya Artamonova Estes last played at the 2008 Olympics (her 5th consecutive Olympics) in such forgettable form. We watched all the Russian matches in Beijing and was not impressed by her performance at all. Well, Russia as a team played horrible in Beijing so no wonder they ended up 5th.

Fast forward to today, she’s a completely different player! Zhenya, who plays for Uralochka-NTMK in the Russian League, is her team’s top all around player. With such great form and plus the experience that no other Russian player has at the moment, Zhenya’s presence on the Russian Team will be a BIG PLUS! She’s one of the best players in the world without an Olympic gold medal. If she’s indeed playing for the team again and Russia qualifies to play at the London Games then maybe she can end her career with gold around her neck.

She’s got 3 Olympic silver medals but just like all athletes the GOLD MEDAL is the must-have!

Artamonova has played professionally across Europe like in Turkey, Italy, Russia and Switzerland wherein she won several League Championship Crowns. She has also played a few seasons in Japan.

Here’s a detailed list of Arta’s achievements with the National Team (excluding tons of individual awards she has won):

We have a feeling she’s going to be the ONLY volleyball player in the world who has played in the Olympics 6 IN A ROW! Follow by Brazil’s Fofao an Cuban Anna Fernandez who have played in 5 with the latter as the ONLY female player with 4 Olympic medals (3 gold and 1 bronze).

Italy and Bulgaria hosts of the ECH 2015?