RUS M: Russia was not interested in taking Wilfredo Leon

Interesting statement from Tomaso Totolo, a member of Zenit coaching staff. Perhaps you will agree with him… 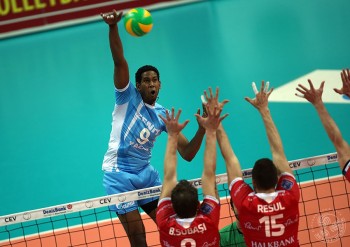 The topic number one in Poland is whether Wilfredo Leon should play for the national team or not after he gained the Polish citizenship. Local media contacted Tomaso Totolo, an Italian coach who spent the last season in Zenit working with Cuban star, and he stated that Russians haven’t really considered an option of taking Leon to their national team.

“In Russia it is different. Here, the national team is treated as a reflection of their own volleyball achievements. Domestic players are growing in their league, climbing through the national team sections until they are finally able to play for the senior squad. The exceptions are of course players from the former Soviet republics. Personally, I am not a supporter of a ‘foreign players in national teams’ idea, because the only thing that connects them with that country is a piece of paper. But, if that is what Leon has decided it means that he is treating Poland as his second homeland” said Totolo for plusliga.pl.

Yeah. Who believes you little liar? 😀

i know some good players from saudi-arabia and they are interested to play for poland NT as their second homeland. anyone knows how would i offer them to polish federation?

ALL the world are liars and the only honest are Polish people ,have you forgotten corruption in PVF and what happened to Mirosław Przedpełski ? Russia has never wanted Leon to play for them, it will be honor for Leon to play for Russia but Russia will not accept it , Russia has defeated best team of Cuba many times without naturalized players , they will be back on top soon without stealing other countries players like Poland and Italy Cuba >> Poland , Russia >Cuba , Russia >>>>>> Poland . read these lines again “In Russia it is different. Here, the national team is treated as a reflection of their own volleyball achievements. ‘ in Poland people just want to win at any cost.

‘in Poland people just want to win at any cost’ seriously? What do you know about Poland? I guess the answer is: nothing!
What about Musersky? Is he Russian? No, he’s not! He was born in Ukraine. Isn’ he naturalised Russian? Yes, he is and what? We do not blaming Russia for it. The same Butko 😉
Poland have great system of teaching and training youth volleyball players. They don’t need Leon at all. There is a lot of great young players. If they ‘want to win at at cost’ like you wrote Akhrem would already play for Poland but he’s not! So stop writing nonsenses 🙂
And one more thing, Russia is not better team than Poland. Now is six or eight teams at the same level. And everyone can win against everyone!

PS. Of course Russian people will always blame Poles, because Poles are guilty of all world disasters…whatever they do 😉

PS2. I feel sorry for you (Russian ppl) You will have grey hair quickly if you don’t stop trolling 😉

@Chang You’ll have to marry them to the daughter of some official to get the citizenship!

If foreign players start changing citizenship and play for different NTs for no good reason it’ll become a huge mess…. And unfortunely that’s already happening. It’s a shame because national team should not be treated like a business.

Sport and volleyball imcluded have become business many years ago! So please let’s all act accordingly

What do you know about Russia? answer : Nothing , Has Muserskiy ever played for Ukraine ???? if Poland is powerful by itself according to what you said, then you should not accept Leon and when you accept it you should admit that you are weak and want to be better by the help of other players from other national teams what about Leon ? He played for Cuba , whatever Soviet Union has won in the past now is regarded as Russia’s achievement, as the biggest country remained from that time, Muserskiy was born there, he could have even chose to play for , You little boy , you’d better learn more from your old homeland Russian Empire. Poland used to be a small state in Russian empire 😉

Poland was never a part of USSR. Learn history and stop insulting Poland in your every post. Moderators do something with him…

russian empire is a s t hole that players like leon doesnt want to represent you even if you propose him money because russia today is a shameful war behind the times country and russia will always hate poland that broken communism in europe…and russia with states is far from civilisation.
poland, czech republic, half of germany, hungary, latvia, estonia etc are ashamed that several generations ago russian communism was under them but the fact all those countries are proud they dont look like russia

since when size of country is a reason that some country is attractive? russian logic from middle ages. russia is state of mind not a country lol

you still don’t know the difference between Russian empire and USSR , you’d better know this is a website for volleyball not History and not place for children like you, Poland won the WCH with great help of corrupted FIVB, @FUN and @FACT go back to your school and listen to your teachers so that you can learn things better.