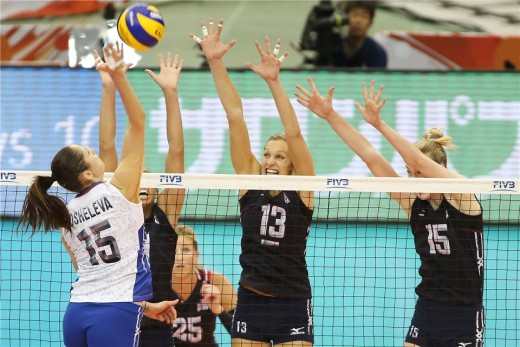 In the first set Russia made huge lead at the second TTO (16-11). USA  didn’t have power to make comeback.

USA had two set balls in the second set but Kosheleva and Fetisova saved both and kept Russia in the game! The Russian side got the chance to win the set, but Kosheleva didn’t manage to score (26:26). Kiraly’s side got another set ball, Hill sent ball out of bounds (27:27).

Russian side had two set ball, every time U.S. team managed to save them all (29:29). But, after so many rallies, Obmochaeva brought new set ball to Russia and after playing some good defense, Kosheleva gave her team 2-0 lead after pipe attack!

Kiraly’s side tried to stay in the game, but after very good performance in the third set, Russia used the second match ball and clinched the game 3-0 (25-23).

Serbia is probably in the best position to win one of the first two places, because they expect to win the last two games. Russia and China will decide who’s going to be the winner of one more ticket which leads to Olympic Games in Rio 2016!

USA is far away of taking one of the first two places, but they could win the third place at the World Cup…

From volleyball floor to catwalk: Alisa from...