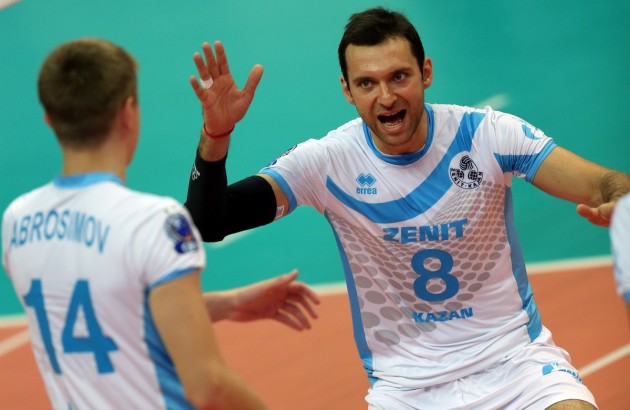 The players of Zenit KAZAN got back to the playground having great motivation to win and make amend for their disappointing performance at the FIVB Club World Championships in Doha, Qatar, where they had ended up in fourth place. Maxim Mikhaylov, who was playing tonight the hundredth match for Zenit, looked very aggressive and strong-willed in the beginning of the game and scored 5 points in a row – 11:7. Zenit KAZAN had some troubles with Knack ROESELARE’s floats and it immediately affected the quality of the Russian attack. Four mistakes resulted in the rival leveling up the score – 19:19. And right in time for the Russians Nikolay Apalikov blocked youngster Tomas Rousseaux and Vladislav Babichev sealed the final 25-22.

The team captains played the leading part in the second set. Hendrik Tuerlinckx scored points attacking from the most complicated positions for Knack ROESELARE. But the set was sealed by his counterpart – Maxim Mikhaylov. He played an amazing series of serves that he concluded with an ace for the score to move up to 13:6 for the hosts.

The Belgians, having toned the rivals down in the previous set, started to fight for every point. With their excellent defense they kept on playing long rallies after saving a couple of very difficult balls. Via tricky serves by Ruben Van Hirtum the guest team moved to the front in set 3 (17:14). Zenit KAZAN had to play very hard to catch up with their opponents and in the end the Russian block contributed the final 3:0.

“Only the final score can be evaluated positively for us” says the assistant coach of Zenit KAZAN Alexander Serebrennikov. “We again made many mistakes and our team’s play is still far from being ideal. Many players take risk, although there are situations when you need to play safer”.

“First of all, it should be noted that we played against the defending champion, who considerably outplayed us at blocks” stresses the head coach of Knack ROESELARE Emile Rousseaux. “Today Joppe Paulides became a father. Three of our players will soon have children. It is a rather interesting situation. Of course, the guys are thinking about their families rather than about Volleyball”.

The best scorers of the match were the respective team captains – Hendrik Tuerlinckx and Maxim Mikhaylov, who registered 18 and 15 points.

ITA M: Coach Blengini between Cuneo and Piacenza: “working on our game”