TUR M: Derby win for HalkBank and a message to Belogorie

HalkBank has defeated Arkas in the big derby of the Turkish Championship and made perhaps the crucial step toward the pole position for the Playoffs. 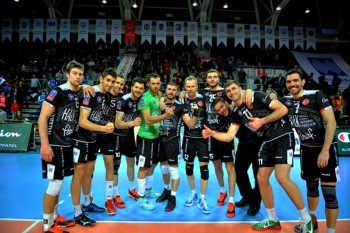 Superb winning streak of HalkBank continues! The champion of Turkey managed to beat Arkas for the second time in this season and to reach score 17-0! The leader now has 6 points more than the main rival, so the race for the pole position might be already decided.

Anyway, this derby was much less exciting than in the first part of the season when HalkBank defeated Arkas in a tie-break. This time everything was over in just three sets. Giant from Ankara had a fierce start, at the first technical time-out it was 8:1! Then it was 16:8, then 1-0 in sets – 25:16.

Arkas finally managed to give a bit of a fight in the third set. Away side was keeping the step all the way until 22:21 for HalkBank when a crucial thing happened. Gavin Schmitt was blocked… HalkBank went on two-point lead 23:21. Finally, it was Michal Kubiak who scored the final point with a strong spike for 25:23 and 3-0 in sets.

HalkBank scored a very important win, and at the same time sent a message to Belogorie in front of the rematch in the Champions League Playoffs 12.

Bruno, you have a challenger! Leg set while falling on the back! (VIDEO)

TUR M: Marshall, do you play for Arkas or HalkBank? (VIDEO)