One of the most important figures in the Turkish volleyball Natalia Hanikoglu goes to Besiktas. 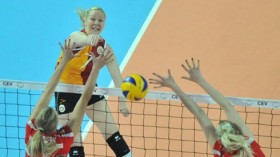 Natalia Hanikoğlu (born June 23, 1975 in Moscow – Russia) is a Turkish-Russian volleyball player. She is 190 cm tall and plays as a middle blocker and outside hitter. She played for Galatasaray Medical Park. She played over 100 times for the Russian national team. She got the Turkish citizenship after getting married with the former Turkish volleyball player Hakan Hanikoğlu. After that she played over 200 times for Turkish national team too. She has a daughter whose name is Ela, born in Moscow.

Protein Drinks and Volleyball: Are They Really Necessary?

Turkish Volleyball Federation have an idea how...