CEV CL M: “CEV Volleyball Champions League is a class of its own” says Andrea Giani

In 1986 Andrea Giani was standing by the side of the court watching his side playing the last and deciding stage of the Champions Cup. Even though his club – Santal PARMA – eventually lost the final match to CSKA MOSCOW, he still feels these are some of the nicest memories he can take from a long and outstanding career in the sport. 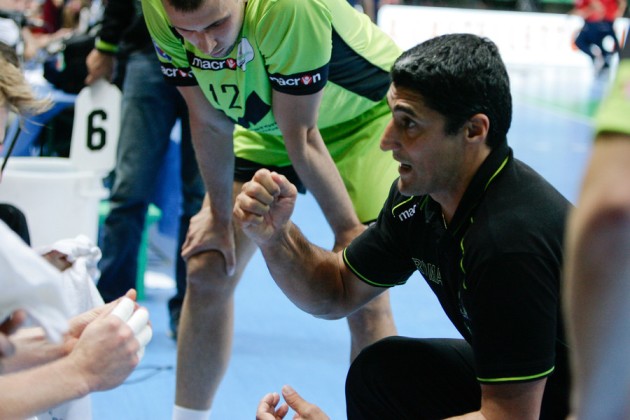 “I was just 15 as I moved to Parma and that year I was working with the junior team but still joined my club for the Champions Cup” says the 42-year old Giani. “But one thing is for sure: I get goose bumps as I start sharing memories from these days where Parma was playing the final of the Cup and players of the Soviet national team, real Volleyball legends by that time that I had never seen in person, were standing on the other side of the net”. Andrea is always modest and although he stopped playing a few years ago, he remains one of the most popular and revered Volleyball personalities out there. Even though his personal showcase is impressive, he actually did never win the CEV Volleyball Champions League. He stood on top of the podium twice, back in the ‘90s, as Europe’s most prestigious club competition was still being played as “Champions Cup”.

Enjoying a break from his second life as Volleyball coach, Andrea has closely followed the prelims of this year’s CEV Volleyball Champions League. “I have been really impressed by TRENTINO and Zenit KAZAN. These teams remain, in my opinion, those who have showed the best quality of play and also a great consistency. I see TRENTINO and Zenit as the major pretenders to the trophy”. Still the way to Omsk, venue of the final four, is quite long and teams have to go through the Playoffs before traveling to Siberia where that much desired crown will be at stake. Giani feels the Drawing of Lots for the Playoffs 12 has provided all pre-conditions for a series of unforgettable Volleyball nights. “Every single clash will be exciting as there are no weak teams at all by this stage of the competition. TRENTINO was drawn to play Dinamo MOSCOW and even though this won’t be an easy task, I think the four-time club world champions can make it through, especially since Dinamo has been sidelined by injuries since the start of the season. I was very much impressed also by Noliko in the prelims but I have the impression they won’t have it that easy with Zaksa KEDZIERZYN-KOZLE. And even though they got their pass to the Playoffs 12 at the very last minute, I assume Arkas IZMIR won’t be an easy opponent at all for PGE Skra BELCHATOW”.

Questioned about which teams may finally make it to Omsk, Giani says: “We know that TRENTINO and Zenit KAZAN, shall everything run according to the expectations, might cross their ways in the Playoffs 6. Still I do not see this as an anticipated final. These teams know perfectly well that to make it to the final four and to win the trophy they still have to stand the opposition brought by other world-class sides. In my opinion, Skra or Zaksa will also get to the finals and as for the bottom of the draw, well, Bre Banca Lannutti CUNEO and Lube Banca Marche MACERATA shall most probably contribute an Italian derby in the Playoffs 6 for the last ticket to Omsk”.

The starting field of this year’s CEV Volleyball Champions League was expanded to 28 teams and Giani is convinced this is a good strategy to support the promotion of the sport. “Even though the teams may still be quite heterogeneous in terms of their skills and value, there is no other way for emerging sides to make it to the top than by confronting themselves with the best clubs in Europe. By joining this elitist arena, up-and-coming teams are involved in a learning process whereby they can take their lesson from those who have been part of this family since a few years. Some people are questioning the value of the European Cups, especially by the time our countries and society are being confronted by a severe and long-lasting financial crisis. Actually I am convinced that we shall understand the added value of all European competitions, especially in terms of general management and marketing. If you search for a sponsor, the companies you are getting in touch with will be certainly attracted by the opportunity to see their logo and trademark being brought around Europe. All clubs have to be as pro-active as possible and in this sense the European Cups stand out as a precious opportunity to support the development of the sport also by implementing a good and innovative management”.

Omsk was recently chosen as the venue that will host the final four of this year’s CEV Volleyball Champions League. Even though his active career in the sport spans through more than 20 years, Giani has never played in Siberia. “I have been many times to Russia but we never had the chance to play in Siberia. Logistically it may be quite a challenge, because of the long trip, but I always enjoyed traveling around and I do think that the venue of such major events – like for instance a final four – shall change regularly. Just imagine what this means for the local community and fans! They will have the opportunity to watch Volleyball at its very best because there is nothing that can be more attractive than a Champions League final. The best players are in action, the atmosphere and ambiance are frenzy: this will be a superb spot for our sport in Russia’s Far East. This is a courageous decision but I hope it will set the tone for others to follow to bring Volleyball close to as many people as possible, especially those who rarely have the opportunity to see what our sport is all about. And as I said, it is all about emotions!”

Waiting for resuming his work with Italy’s national team that got bronze this past summer in London and for a club to search for his experience and unique touch, Andrea does not look back to his past days as one of the world’s greatest Volleyball players. “Actually I prefer to look forward and I feel ready to take up another cause and challenge for the good of the sport. I especially look forward to other emotions. They are the real quintessence of sport, the thing that brings people together”.