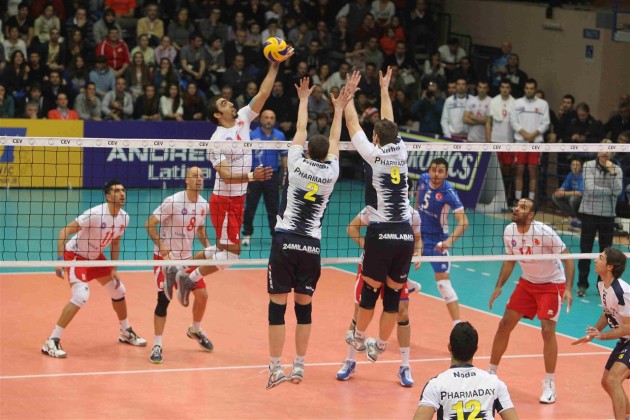 The first set was pretty balanced with Halkbank ANKARA going up 9:6 on good serving and with the score standing at 14:8 before the second technical time-out. Poland’s Jakub Jarosz could help LATINA storm back before Venezuelan Luis Augusto Diaz did re-open once more the gap for the guests from Turkey (19:16). LATINA fought back anchored by Jarosz and Jeroen Rauwerdink but US American Reid Priddy could eventually finish it off for Halkbank (25-22).

Andreoli LATINA could regroup in the second set opening strong there (6:3, 11:8) but the balance was restored right down the final stretch (22 all), before the hosts could claim the last couple of points calling for the provisional 1:1 (26-24).

LATINA head coach Silvano Prandi decided to include veteran Alberto Cisolla also in his starting six for the third set and that eventually turned into a good move with Andreoli opening with a 5:2 break. However, Halkbank responded well powered by Egyptian spiker Ahmed Abdelhay (pictured) and after drawing level at 6, the guests broke away in the score (13:10) before leading by five points at the second technical time-out. Prandi decided to try a couple of substitutions with Stefano Patriarca and Murphy Troy joining the game, but it could not prevent Halkbank from pocketing the final 25-21.

The start of the fourth set was very close but Halkbank could cruise to the front quite early (9:6) and did not lose control of the operations anymore (17:12, 21:17) to close it at 25-21 and claim an extremely important away win.