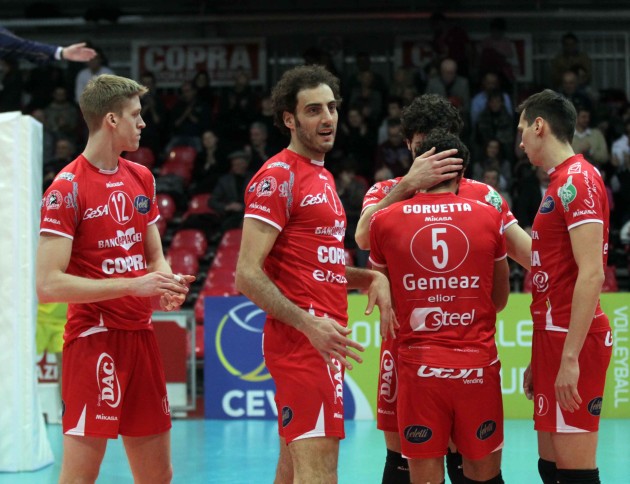 Alessandro Fei eventually top scored for PIACENZA with 16 points with Hristo Zlatanov and Cuban Robertlandy Simon also finishing the game in double digits with 13 and 12 respectively. On the other side of the net Jan Hadrava chartered 12 points including 4 aces.

Copra Elior immediately set the pace of the game (4:3, 7:6) gradually widening the gap with the contribution of Fei and the solid blocks by Zlatanov (11:7, 14:8). PIACENZA did not slow the pace down and excellent serving provided by Holt moved the count up to 21:8 with team captain Hristo Zlatanov eventually finishing it off at 25-14.

Dukla LIBEREC got to the front for the first time in the early phases of the second set (6:9) so that PIACENZA mentor Luca Monti decided to substitute Papi with Gabriele Maruotti. PIACENZA could fight their way back drawing level at 10 but a few moments later Hadrava could shake the Italian defense line with a couple of aces (13:17). Maruotti took his side by the hand trying to close that gap before Holt almost tied the score with an ace (22:23). A very close final rush followed with two blocks killed by Cuban star Robertlandy Simon eventually cashing the final 26-24 for the home side.

In set 3 PIACENZA did not show any mercy and stormed out to a 7:3 and 12:6 lead; by the score of 15:8, head coach Luca Monti felt he could opt for his second lines, so Luca Tencati and Slovak Frantisek Ogurcak joined the game replacing Simon and Zlatanov respectively. With their second setter Antonio Corvetta on court, PIACENZA did not lose quality and consistency and could easily wrap it up at 25-16 for a much desired home win in straight sets.