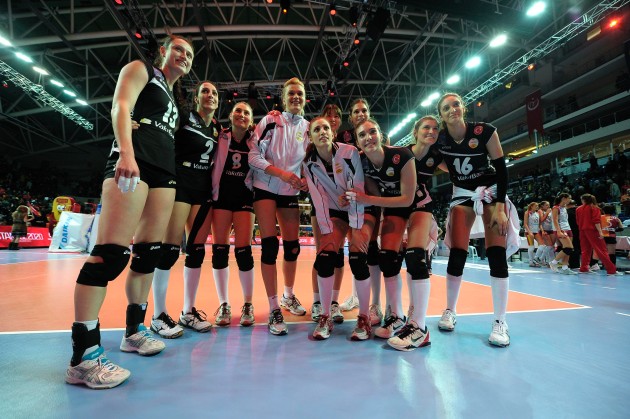 The quality of the match remained outstanding in the beginning of the second set with both teams showing impressive rallies. It needed great efforts for both squads to place the Mikasa on the opponent’s court as block-defense tactics worked exemplary on both sides. Christiane Fürst blocked for a 16-13 Vakifbank lead at the second technical break. Small details made the difference: a missed counter-attack, a block touch, an imprecise passing. Fürst’s block winner paved the way for Vakifbank’s winning strike. The guests scored six consecutive points to take a comfortable 21-13 lead. Guidetti’s team never looked back to take a hard-earned 2:0 set lead. The main difference at that point of the match was Vakifbank’s offensive power.

However, there was no reason for Galatasaray to hang their head. The ladies of coach Barbolini played a great game so far. The scoreboard showed 5-5 at the start of the third set, then 8-8; and there was nothing to separate the two teams at that moment of the electrifying duel. 22-year old Vakifbank setter Naz Aydemir tried to speed up her offensive game in the middle of the third set with some quick combinations. It helped as Galatasaray’s middle blockers instantly experienced a hard time. At the second technical timeout, Vakifbank already led by five points. Still, it was not good enough. The hosts scored seven (!) points in row to turn the tables. But at 20-19, Neriman Özsoy fired wide to give Vakifbank the chance to bounce back. Two consecutive winners by Captain Gözde Sonsirma brought up set and match ball for the Guidetti team at 24-21, and Fürst closed it out with a blistering diagonal winner to offer her teammates the well-deserved tickets for Sunday’s gold medal game.

Gözde Sonsirma, Captain Vakifbank ISTANBUL: “It was a great match tonight with a great atmosphere. Luckily we managed to win the first set. That was the key moment of the game.”

Giovanni Guidetti, Head Coach Vakifbank ISTANBUL: “Congratulations to my players, but also congratulations to Galatasaray. Massimo Barbolini showed once more that he is a great coach. He managed to prepare his team impeccably. It gave us a very hard time to win.”

Leo Lo Bianco, Captain Galatasaray ISTANBUL: “Unfortunately we missed to win the first set. We stared very well and had all chances on our side to win the opening set. However, Vakifbank deserved the victory tonight.”

Massimo Barbolini, Head Coach Galatasaray ISTANBUL: “It was not enough to play well in the first and partly of the third set. Still, I’m proud of my players, they never gave up tonight.”