Zenit KAZAN could nevertheless complete their campaign in the 2013 CEV Volleyball Champions League by claiming their fourth European medal – this time a bronze – after edging Zaksa KEDZIERZYN-KOZLE of Poland 3:1. Find all relevant news from volleyball world on worldofvolley.com. 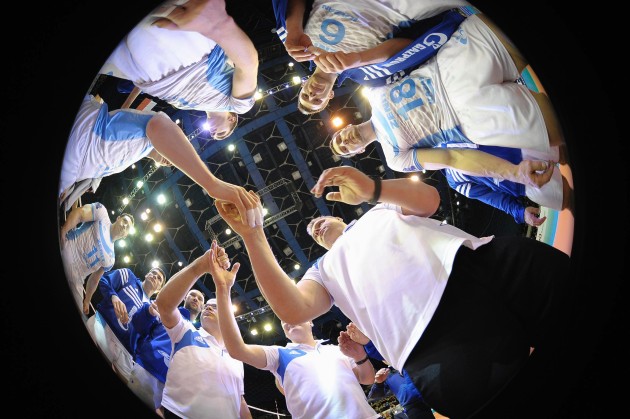 After losing at the tie-break their semi-final matches on Saturday, Zenit and Zaksa were back in action at “V. Blinov” sports complex with the intention to end their European campaign on a high note. Last year’s winners from Tatarstan were searching for their fourth podium finish in the competition to be added to their showcase that includes another gold – in 2008 – as well as a silver medal from 2011. On the other hand, Zaksa KEDZIERZYN-KOZLE was celebrating its third appearance in a bronze medal match of the CEV Volleyball Champions League with a record of 1 loss – to Iraklis THESSALONIKI – and 1 victory – over France’s PARIS Volley – dating back to 2002 and 2003. This fixture was also going to prolong the long-lasting rivalry that Russia and Poland are well-known for and hence much was at stake right from the start of the last competition day in Omsk.

The sports hall – though the final match with the home heroes of Lokomotiv was coming up only three hours later – was literally packed and one could easily assume that Zenit would have enjoyed the support of the Russian audience now that they were no longer opposed to the “Siberian express”. This assumption eventually turned into reality as Zenit mentor Vladimir Alekno – one of the Olympic heroes from London 2012 – was loudly cheered when his name was announced by the speaker. In comparison with the semi he decided to make some changes to his starting six with middle blocker Nikolay Apalikov – who had played only shortly on Saturday – joining the game right from its very beginning.

Though they had just missed out on a spot for the final act of Europe’s elite competition, the players of both teams looked very determined and Zaksa caught a promising start (8:5) powered by their best spikers, Antonin Rouzier and Luis Felipe Fonteles. Similarly to what had happened the day before in the semis, Zenit found it difficult to play with the right consistency helping their rivals with unforced errors that Alekno was evidently not happy with. As Zenit was trailing 8:12, the speaker invited the local supporters to cheer on KAZAN and Maxim Mikhailov promptly paid back with an exquisite crosscourt. Zaksa head coach Daniel Castellani asked for his first time-out as the Tatars had dangerously approached in the score (13:12) at the end of a positive 4:1 series and Fonteles – one of the most valuable players signed by the Polish club for this season – brought the next rally home. Alekno decided to replace US American Matthew Anderson – who had already largely disappointed on Saturday – with the experienced Yury Berezhko and this move proved to be the right one as on his serving turn Zenit moved to the front for the first time (18:16). Zaksa could draw level at 18 on another prodigy by Rouzier but Zenit re-opened the gap (22:19) as the Tatars were growing in confidence as well as in the quality of their play. KAZAN eventually got three opportunities to claim the first set – after performing a real comeback from a sloppy start – and the second chance was easily cashed by the Tatars as Rouzier served into the net (25-22).

Sticking to the saying that you shall never change a winning team, Alekno opted for the inclusion of Berezhko and Apalikov also on the starting six he jotted down for the second set, but similarly to what had happened in the opening section of the match, it was Zaksa that initially set the pace (8:4). Zenit struggled to compensate for that slow start while, on the other side of the net, Zaksa offense was well orchestrated by setter Pawel Zagumny (11:7) and Rouzier scored with impressive consistency from every single angle of the court. Zenit did not show any intention to give in but some more mistakes eased up the task of Zaksa whose margin stood at four points also by the second technical time-out (16:12). Some 50 fans who had travelled to Omsk from the capital city of Tatarstan intensified their support from the stands and Zenit could start its comeback anchored by their superstar Mikhailov. The gap dropped down to only one point more than a couple of times before Zaksa broke away once more (22:19). At 22:20 for KEDZIERZYN-KOZLE, Alekno brought in Kolodinsky and Lee for Vermiglio and Apalikov, but the Italian-born setter returned to the court only a few moments later as Zaksa could start glancing at the finish line that was ultimately reached as Fonteles spiked from the back row for the final 25-22.

It looked like Zenit – starting with David Lee for Apalikov – found back their best play in the early phases of the third set (7:1) as the US American middle blocker cemented the quality of the Russian block while Mikhailov was also back on track spiking with full power and his always perfect technique. On the other hand, Zaksa had never been that faulty since the start of the game with Rouzier being the only one who could score from time to time. As Vermiglio was using more often his middle-blockers, Zenit called for the first mandatory stop with the score standing at 8:2, quite a good omen for the remainder of the set. However, KAZAN suddenly lost momentum with Zaksa clawing back (11:8) and Alekno trying to break the negative series of his side with a time-out. He got the effects he was searching for as his guys fought bravely to keep that margin (16:12, 18:14, and 21:17) all the way through to the provisional 2:1 that was sealed by a block-out on Mikhailov (25-20).

Though they had missed on the opportunity to emulate their compatriots of Lokomotiv BELGOROD – the sole Russian team able to claim back-to-back wins in the CEV Volleyball Champions League back in 2003 and 2004 – the Tatars were still very determined to round off their campaign with a bronze medal to be added to the showcase of the most decorated Russian team in the past decade. With David Lee – his addition was probably the best move that Alekno came to – almost unstoppable from the middle, Zenit quickly turned into the pace-setter of the game also in the fourth set (8:5); Mikhailov and especially wing-spiker Evgeny Sivozhelez also did a good job cementing the chances of their side (16:11) to edge their Polish opponents. The players of Zaksa looked nervous and started questioning the decisions of the referees as the match seemed to be a little compromised (19:12 for Zenit) and KAZAN never looked back to eventually fire up the first Russian party of the day.

To read more news from this competition click on CL M F4 OMSK.