CEV CL: Bre Banca Lannutti hopes to back up great away win to claim Italian derby

After scoring a splendid 3:0 away win this past Wednesday in Macerata, Luigi Mastrangelo – one of the leaders of Bre Banca Lannutti CUNEO – clearly stated: The return match in Cuneo will be a real battle. 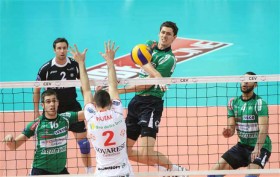 The winner of this clash will most probably have to play TRENTINO PlanetWin365 in the Playoffs 6 after the guys captained by Matey Kaziyski claimed a classy away win in Belgium against Noliko MAASEIK.

Back to Lube Banca Marche MACERATA and Bre Banca Lannutti CUNEO, these sides will be playing on Wednesday their third match-up in about 8 days as this weekend they will be crossing their ways again also in the national league. In order to make it to the Playoffs 6, MACERATA has to win the return game as well as the golden set that would eventually round out the evening.
“This is a very important success but our ticket to the Playoffs 6 is not yet there” had commented the head coach of Bre Banca Lannutti, Camillo Placì, right after that away win in Macerata.

This game has a very special flavor as MACERATA head coach Alberto Giuliani was at the helm of Bre Banca Lannutti from 2009 to 2011, helping CUNEO take the national league for the first time in history two years ago. Simone Parodi and Igor Omrcen, currently playing for MACERATA, spent a few years in Cuneo while Luigi Mastrangelo and Wout Wijsmans have embarked on a different journey, having previously played for Lube Banca Marche before joining their forces with CUNEO.

Germany: Generali UNTERHACHING is reaching out for top of the charts