The players of Crvena Zvezda BEOGRAD travel with some caution to Poland for their debut in the 2012 CEV Volleyball Champions League which is scheduled for this Wednesday, November 30. 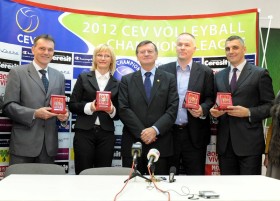 The head coach of Crvena Zvezda, Ratko Pavlicevic, believes that experience is a major asset for Muszyna, cev.lu

The head coach of Crvena Zvezda, Ratko Pavlicevic, believes that experience is a major asset for Muszyna.

“Via our participation in the CEV Volleyball Champions League we want to develop our young team. I am convinced that some of our players will draw much attention from top clubs. I rely on their enthusiasm even though I know that it will not be easy for us in Poland. Muszyna has been playing at this level for a long time but we are not afraid of our opponents. Our goal is to take as many points as possible” he states.

Ana Bjelica, the young captain of Crvena Zvezda, says the Champions League is a great challenge for her and her friends.

“We are the youngest team included in the starting field but we always share the same goal, which is to play well” she says.

The setter of Crvena Zvezda, Bojana Radulovic, is the most experienced player included in the roster and back in 2004/2005 she competed in the CEV Volleyball Champions League reaching the final game while representing Italy’s Asystel Novara.

“We are in a good mood and well prepared for this match. Everyone will surely play at their best because this is a unique experience” she adds.

Schweriner SC is ready for first CL appearance in 10 years